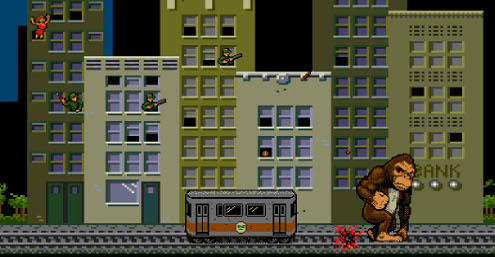 If we were in charge of compiling a collection of Midwayâ€™s best arcade games, we would have picked the cream of the crop from the Midway Arcade Treasures series and included as many extras we could get our hands on.

Midway Arcade Treasures 2 was one of our favourite retro collections of the PlayStation 2 era, including such simple yet pleasing gems as Rampage World Tour, Mortal Kombat 2 and 3, Primal Rage and Hard Drivinâ€™. Midway Arcade Treasures 3 on the other hand had a focus on racing games, featuring the Dreamcast versions of Hydro Thunder, San Francisco Rush 2049 and more besides.

Sadly Warner Bros do not share our vision – not one of those games are present here.

So what do we have? 31 games from â€œthe golden age of gamingâ€, with the newest being 1992â€™s Total Carnage. Compare the list of games present to those found on 2003â€™s Midway Arcade Treasures and on first glance the contents are near identical. Look a little closer though as youâ€™ll see some incredibly odd omissions such as Klax, Paper Boy and Road Blasters. No Paper Boy? What?

So far weâ€™ve moaned about the games not present. Thatâ€™s this collectionâ€™s main fault â€“ there are so many games that really should have been included. What is here though is a pretty good assortment, with way more thrillers than fillers.

Time has been kind to the twin-stick shooter Smash TV, Rampage is still a lot of fun and Rampart shares many elements still featured in todayâ€™s tower defence games. Defender and Robotron 2048 remain good tests of reflexes, while Gauntlet I and IIâ€™s speech samples made us feel warm and nostalgic inside.

It was Toobinâ€™ and Root Beer Tapper that held our interest the longest. Toobinâ€™ is the epitome of quirky â€˜80s game design â€“ an idea that was new at the time and hasnâ€™t been copied since. Controls remain responsive and itâ€™s still a lot of fun. As for Root Beer Tapper, it really is the work of genius â€“ twitch gaming at its best, requiring you to jump back and forth collecting glasses and pulling pints without a pause.

We spent a lot longer than expected playing Xenophobe and Xybots too. Xenophobeâ€™s sprites are still packed with character and itâ€™s surprisingly involving, while 3D corridor blaster Xybots provides a decent challenge once you get your head around the controls.

Time has been less kind to Tournament Cyberball 2072, Spy Hunter II, 720Â° and Pit Fighter though; Championship Sprint, Super Off Road and Super Sprint are all a bit too much of a muchness for our liking.

Itâ€™s also worth bearing in mind that a lot of these games originally had novelty controllers â€“ Marble Madness doesnâ€™t feel quite the same without its trackball, and Vindicators II is a pain control without giant twin-sticks.

In respect of presentation, Midway Arcade Origins also disappoints. Thereâ€™s a CGI intro, online leaderboards, a choice of screen sizes and the option to smooth the visuals over and thatâ€™s your lot. There are some nice looking 3D arcade cabinets on the menu screen, but you canâ€™t spin them around to check out their artwork. There are no scans of posters or even text-based descriptions detailing the history of the games. It really is a very bare-boned package.

The achievements do add something though. Thereâ€™s one for each game and a few are quite challenging, such as beating the first level of Smash TV without losing all your lives. Aim to get 1000G out of this one and you should get a fair few hours of entertainment.

It may have a price tag of Â£19.99, but that doesnâ€™t excuse the fact that this is a missed opportunity. It really highlights how good a job Backbone Entertainment did with Sega Mega Drive Ultimate Collection back in 2007. The bizarre thing is, this is from the same developer. We can only assume that Warner Bros either didnâ€™t give them much development time or access to resources, and thatâ€™s a massive shame.