Thinking of buying a Kinect to keep the kids quiet this Christmas? Youâ€™ve picked a good time to make a purchase â€“ you should be able to find one for under Â£80 new, and significantly less second hand, with games starting at literally pocket money prices.

You should feel sorry for our downstairs neighbour â€“ weâ€™ve played most of the games that the Kinect has to offer. Weâ€™re now passing our knowledge onto you, so you donâ€™t have to rearrange your furniture and end up playing a game that feels like it has been forged in the bowels of hell. 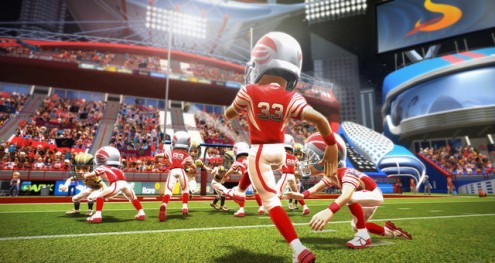 Kinect Sports Double Pack
If you own a Kinect and not at least one of the Kinect Sports games then youâ€™re missing out on one (well, two) of the Kinectâ€™s finest. Season One has the better presentation of the two, but Season Two is the better package overall. Season Two does have a â€˜money grabbingâ€™ feel to it though, with lots of prompts to purchase extra challenge packs. Basketball is an additional download too. Thankfully a double pack exists so you can get the best of both.

Child of Eden
While this psychedelic shooter can be played with a joypad â€“ a fact that Microsoft and Ubisoft kept rather quiet before launch â€“ it feels a lot more intuitive playing with motion controls, waving your arm around to lock on targets and then pushing it forward to shoot. Fans of Segaâ€™s Rez will feel right at home.

Dance Central 1-3
Take your pick, here. All three of the Dance Central games are thoroughly excellent. The original, which launched alongside the device, can be picked up for less than Â£10, while Dance Central 2 shouldnâ€™t set you back much more. Ubisoftâ€™s Just Dance series is worth a mention too – Dance Central is more substantial, but the Just Dance games are a little flashier.

Sesame Street: Once Upon a Monster
This wasn’t originally conceived as a Sesame Street game â€“ the idea for it came first, and then the license was added at a later date. Double Fine wanted this to be a game that parents can play along with their children. Or you could just kill two birds with one stone and use it to keep two children quiet at once. Itâ€™s rather lovingly made.

Fable: The Journey
The Fable games are renowned for their moral choices and freedom but not this one â€“ itâ€™s an on-rails journey across a land thatâ€™s being smothered by evil. Voice acting, character development and visuals impress, but the fact that you spend most of the game behind the reigns of a horse instead of carrying out quests makes it an adventure thatâ€™s likely to be soon forgotten.

Kinect Star Wars
Itâ€™s easy to tell that Kinect Star Wars had a rough development. A handful of studios worked on it, each throwing their ideas into the proverbial pot. The third-person adventure mode is a bit lame but the pod racing and dancing mini-games are nicely done. The rancor city-smashing mini-game should please younger gamers too. The dancing mini-game does take massive liberties with the license though, which upset a few Star Wars die-hards.

Kung Fu High Impact
Not the easiest of games to find â€“ it was released only in the US and some parts of Europe â€“ but itâ€™s worth tracking down as it’s laugh-out-loud funny and surprisingly challenging. A lot of the later levels take a fair few attempts to complete, requiring you to use power-ups sparingly. Seeing yourself on your TV screen, leaping through the air and firing magic arrows is rather neat.

Rabbids: Alive & Kicking
Another one thatâ€™s amusing to play. Itâ€™s as mad as a box of frogs, with a lot of mini-games inspired by arcade classics. One plays like Breakout, only instead of a bat and ball you control a fireman on a firemanâ€™s pole and the ball is a flaming marshmallow. Another mini-game meanwhile plays like Lemmings, the idea being to use your limbs to guide the Rabbids to safety. The achievements too are a lot of fun to get, requiring you to play games different to how theyâ€™re supposed to be played.

Puss in Boots
A movie tie-in? Yes. This is one of the better movie tie-ins of recent times. A motion controlled platformer with combat sequences and stealthy bits, all of which are entertaining as the controls work perfectly. Production values are high too â€“ it looks the part and Antonio Banderas himself supplies the vocal talent. The only downfall is the length â€“ it can be beaten in around three hours. 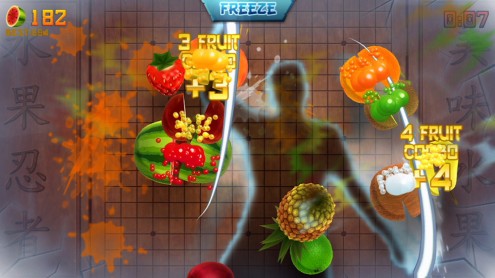 Fruit Ninja Kinect
Up there with Kinect Sports, Fruit Ninja Kinect is one of the Kinectâ€™s finest. Controls are intuitive â€“ simply swipe your hand to slice fruits and build up combos. Each game is randomised with different power-ups appearing, which makes it incredibly addictive. The two-player mode is good fun also. As well as a download itâ€™s also bundled free with The Gunstringer â€“ an above average platformer that can now be found for around Â£10.

Happy Action Theatre
Another one from Seasame Street: Once Upon a Monster developers Double Fine, Happy Action Theatre stands proud on Metacritic with an 80% average. â€œMy daughter played Happy Action Theater for about three hours when we first downloaded it. We had to drag her away. She shows it off to her friends, who are equally enchanted by it. She now asks to play it after school rather than watch TV,â€ said Eurogamer in their 9/10 review.

Haunt
Haunt achieves more than Rise of Nightmares did. Weâ€™re using Segaâ€™s disappointing first person adventure game as a comparison there as both share the same perspective and are based around spooking the player. Haunt though has a much more comic vibe â€“ paintings with eyes that move, like something out of Scooby Doo. Double Fine’s Tim Schafer also had a helping hand in this one.

Diabolical Pitch
Itâ€™s odd that this one didnâ€™t receive much press attention â€“ itâ€™s by Grasshopper Manufacture, of Killer7 and No More Heroes fame. The hero, a superstar baseball player, finds himself in an afterlife amusement park full of zombies and must use his batting skills to slay waves of the undead. If they get too close they can be given a swift kick to push them away. Itâ€™s a pleasingly daft game and one of the few mature Kinect titles.

Wreckateer
This castle smashing sim did get a little bit more attention than most XBLA Kinect games, due to being demonstrated during Microsoftâ€™s E3 conference. Itâ€™s a 3D Angry Birds of sorts. â€œWhile the storyline may be a bit hokey and the voice-acting a bit childish, the fun that can be had with the gameplay and smooth easy motion controls just can’t be denied. It’s the best kind of fun: simple to play, but hard to master. It’s a casual motion controlled game that actually works well, and offers up real satisfaction when that control pays off it high scores and massive destruction,â€ said Destructioid in their 9/10 review. 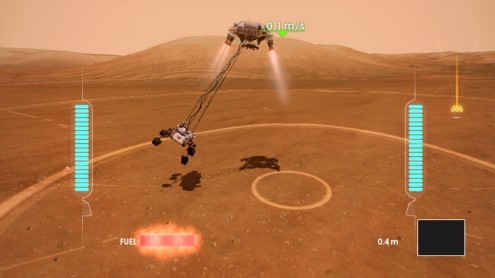 Kinect Fun Labs
There hasnâ€™t been much going on in the world of Kinect Fun Labs recently, suggesting that Microsoft have given up on their free to download hub full of Kinect gadgets and gizmos. Things like Kinect Bobble Head â€“ which puts your head on a bobble doll â€“ arenâ€™t worth bothering with apart from the easy achievements they contain, but Junk Fu, Battle Stuff and Mars Rover Landing each provide a good hour or so of free entertainment each.

Kinect Playfit
Another free download, but not a game as such. It measures the amount of calories youâ€™ve burnt off playing Kinect games and then tracks your fitness level on a leaderboard. Only certain games are supported though, most of which are first-party, but weâ€™ve managed to get a few achievements out of it despite not owning many of the supported games. Expect more to be added in the future.

What’s next for Kinect?

There’s a notable lack of big-name Kinect games on the horizon, but you’ll at least be able to shout at guards in Splinter Cell: Blacklist and call Cartman a “fat ass” in South Park: Stick of Truth. Now there’s a thing.