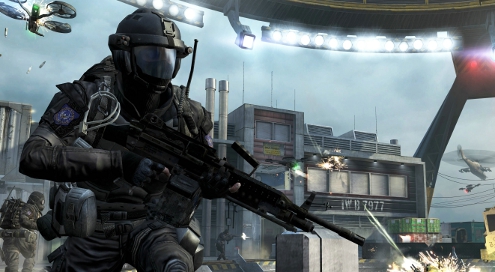 Call of Duty: Black Ops is the best selling Call of Duty so far, beating even Modern Warfare 3, so it makes sense that Activision has chosen to give it a sequel. In fact, all of the Call of Duty games have sold so astonishingly well that it would make sense to make sequels to any of them. Except maybe for Call of Duty: Big Red One, as then it would end up with an even stupider name.

Reviews of Call of Duty: Black Ops II appeared online at 8am this morning. Just like Halo 4 and Assassinâ€™s Creed III, they have have been a little bit mixed. Now Gamerâ€™s 7.5 review is well worth a read, as is the 8/10 from the Official PlayStation Magazine. From the looks of things theyâ€™re two of the few places to get advance review code of the PS3 version. IGN meanwhile thought it was the best Call of Duty yet, awarding it a mighty 9.3.

Supposed system seller Call of Duty: Black Ops Declassified is also out on PS Vita. Although it says Activision on the box, it is to all intents and purposes and a Sony production â€“ it was developed by one of Sonyâ€™s studios (Nihilistic, of Resistance: Burning Skies fame) and Sony are handling all the marketing for it. The current lack of reviews is very worrying. EDGE has an article on it thatâ€™s well worth reading even if youâ€™re not planning to buy it.

Two karting games are having their own battle this week â€“ Sonic & All-Stars Racing Transformed and F1 Race Stars are going head-to-head. Both are available online for less than full-price â€“ most online retailers have F1 Race Stars for Â£29.99 and Sonic Racing Transformed for Â£24.99. The first batch of copies of the latter are marked as â€˜limited editionâ€™ and come packaged with Metal Sonic and an Outrun track DLC.

We played a bit of F1 Race Stars at Eurogamer Expo and quite enjoyed it. Thereâ€™s a demo now available to make up your own mind.

Following on from last weekâ€™s LittleBigPlanet Karting, Wonderbook: Book Of Spells is another one of Sonyâ€™s big Christmas releases. J.K. Rowling has had a hand in this and Harry Potter fans will no doubt be curious â€“ via the PS Move budding wizards can learn such spells as Incendio, Wingardium Leviosa and Expelliarmus. We donâ€™t have a clue what these are.

The cash-strapped THQ are also releasing Saints Row: The Third – The Full Package â€“ which has a price tag of Â£29.99 and contains 3 mission packs and 30 bonus weapons and outfits â€“ while Alternative Softwareâ€™s Rugby League Live 2 is out on PlayStation 3 and Xbox 360. Theyâ€™ve made loads of rugby games in the past, so weâ€™d image that theyâ€™ve got the knack of it by now.

Thereâ€™s a couple from Ubisoft too – The Hip Hop Dance Experience on Wii and Xbox 360, which is approximately their 37th dancing game this year â€“ and Rabbids Rumble on 3DS which we very much doubt is any worse than Rabbids 3D because that would be impossible.

Rounding the week off is a huge slew of casual games â€“ The Cube, Monster High: Skultimate Roller Maze, Nickelodeon Team Umizoomi, Dora and Friends’: Fantastic Flight, Nintendo Presents: New Style Boutique and Raa Raa The Noisy Lion. We trust you donâ€™t have a passing interest in any of these. Well, we hope thatâ€™s the case.