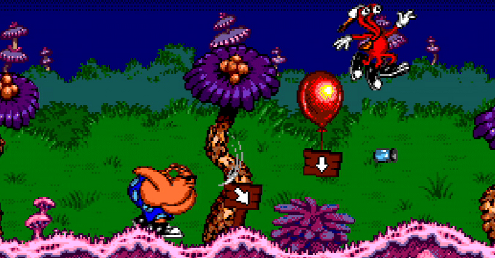 800 Microsoft Points â€“ or Â£7.99, if you prefer â€“ may seem quite steep for a collection containing two crusty old Mega Drive games, but there is a reason of sorts behind this. Although Sega published the ToeJam & Earl games back in the early â€˜90s, they donâ€™t own the rights to the characters â€“ original creator Greg Johnson does.

According to this article on Kokatu from 2009, whenever Sega has requested use of the characters in the past theyâ€™ve offered Greg Johnson â€œvery little moneyâ€ in return, hence why the alien duo wasnâ€™t present in either Sega Mega Drive Ultimate Collection or Sonic & Sega All Stars Racing. For this collection to happen Sega has perhaps finally agreed to stump up a sufficient amount of cash.

Weâ€™re certainly glad the two have managed to seal a deal. 1991â€™s ToeJam & Earl is a game many have cherished memories of playing due to it being one of the Mega Driveâ€™s finest co-operative games. The sequel ToeJam & Earl in Panic on Funkotron is less well remembered, even though it had more originality packed into it than most 2D platformers released around the same time.

Presentation is on a par with Segaâ€™s previous Vintage Collections. Both now offer online play, a jukebox mode and a choice of screen options. Visuals can be smoothed over if you for some reason find their pixilated nature offensive, and they can both be played either full screen or with a border and a wallpaper of your choice.

The original ToeJam & Earl was way ahead of its time. The idea is to traverse around either fixed or randomly generated landscapes looking for spaceship parts and the elevator to the next level. Although it does appear to be an alien world that youâ€™re exploring, it is in fact supposed to be how the duo see planet Earth through their eyes. Colourfully-wrapped presents are scatted around, and picking up one of these will add a random item to your inventory. These range from tomatoes, which are used to kill enemies, to items that can help you get around the worlds quicker.

Most of the enemies are human stereotypes including gaggles of geeks, fat opera singers and brats being pushed around in shopping trolleys by disregarding mothers. A lot of their speech samples raise a grin, especially the dentistâ€™s maniacal laugh. As well as humans there are also cherubs that reverse your controls if they manage to hit you with an arrow, hamsters in giant exercise balls thatâ€™ll squish you flat and swarms of bees thatâ€™ll shove you off the edge of the level. Worry not if this happens â€“ you simply fall back down to the level below. This is an example of one of many genius ideas present.

Other examples? The aliens can share health by giving one another a â€˜high fiveâ€™, and when playing in two-player the screen splits into two when players go their own way and then merges back into one screen when reunited. Itâ€™s when playing co-operatively that the game really shines â€“ presents can be dropped and shared and the levels are large enough to warrant splitting up to cover more ground quicker.

Thereâ€™s a pleasingly daft sense of humour throughout, but even though itâ€™s impossible not to play without cracking a smile or two, it can be quite a frustrating game at times. Later levels are crammed with enemies and covered in potentially dangerous quicksand. The tornadoes that randomly appear and carry you off are also particularly bothersome. Presents too are randomised until you open them and not every present is helpful. One drains your health bar instantly while another makes a thunder cloud appear above either ToeJam or Earlâ€™s head which too gradually depletes health. Back in 1991 they were annoying and in this day and age it seems like an even more odd design choice to give players power-ups that punish.

Still, if we were to write an article dedicated to games to play before you die, then ToeJam & Earl would be mentioned without doubt â€“ playing with a friend remains an entertaining experience and the humour is still relevant today.

Panic on Funkatron on the other hand is a genuine curio. The reason the original ToeJam & Earl was praised upon release was because it wasnâ€™t just another 2D platformer. So what did Sega do? They turned the sequel into one. Thereâ€™s still a sense of exploration though â€“ the alienâ€™s home planet has become inhabited by some pesky humans who have to be found and then caught in jars. Sometimes theyâ€™re just walking around waiting to be caught; other times they have to be shaken out of trees and the like. An arrow at the bottom of the screen points to the location of the nearest human and thereâ€™s also a â€˜funk scanâ€™ you can perform to pinpoint their hiding place.

Underwater sections add some variety, as do the trampolining and rapping mini-games. The controls are a bit woolly â€“ jumping doesnâ€™t feel particularly natural and thereâ€™s a few too many leaps of faith required. Itâ€™s not a bad game by any means, but itâ€™s not a patch on the original.

For many this is a collection that has been a long time coming â€“ weâ€™ve not seen ToeJam & Earl since the Virtual Console release way back in 2006. Fans will be in their element â€“ itâ€™s a nicely presented collection and the ability to save progress in the occasionally unforgiving original is a literal lifesaver. For newcomers weâ€™d suggest having a friend in mind to play with as both of these games are at their best with a pal at your side, just as they were back in the day. Introducing somebody new to the world of ToeJam & Earl really is quite an experience and one that fans will no doubt already be familiar with. Here’s the chance to do it all again.