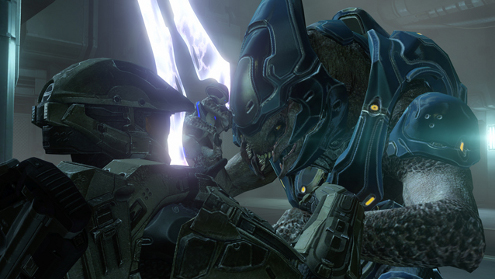 What are the scores on the doors for Halo 4? A curious mixture is the answer. The highest score weâ€™ve seen is a lofty 9.8 from IGN, followed by 97% from GamesMaster magazine. At the opposite end of the scale sits EGMâ€™s 7.0 review, who panned the shooter for being too similar to the previous games.

8/10 seems to be the median score though, which is what both Eurogamer and EDGE gave it. â€œHalo 4 isnâ€™t a reinvention so much as a recalibration, a common-sense repair to a drifting narrative, with a hero who is now back in play and back at his best,â€ said EDGE.

With Microsoftâ€™s big name Kinect titles Dance Central 3, Fable: The Journey and Nike Plus Kinect Training failing to enter the top 40 (aside from Fable, which entered at a lowly #37), Microsoft needs Master Chief to perform well this winter and we donâ€™t doubt that he will.

Speaking of Kinect, Marvel Avengers: Battle for Earth is making a not very earth shattering appearance. We weren’t too impressed by the demo, but reviewers seem to be enjoying its simple but frantic nature â€“ EGM and The Official Xbox Magazine both awarded it a 7.

Over on Wii thereâ€™s Andrew Lloyd Webber Musicals: Sing & Dance from the brilliantly named Tubby Games, and something called Pirate Blast, which comes with a plastic gun.

There are a couple of re-releases out this week too. The Caribbean city building sim Tropico 4 Gold Edition includes the full game and the Modern Times expansion for Â£29.99. We quite enjoyed the original. Then thereâ€™s the Mass Effect Trilogy which bundles the three games together, but no DLC for either ME2 and ME3, and only one piece of DLC for ME1 – Bring Down the Sky. PlayStation 3 owners will have to wait until December for their trilogy. Edge of Reality, who usually handle EAâ€™s console version of The Sims, are converting the original Mass Effect to it. Apparently it runs rather well. Lest you forget, the original hasn’t previously been released on PS3, being an Xbox 360-exclusive.

A couple of big hitters are arriving on Sony formats â€“ LittleBigPlanet Karting and Ratchet & Clank Q-Force. The latter is a purse pleasing Â£14.99 and contains both the PS3 and PS Vita versions. LittleBigPlanet Karting on the other hand is a full price release and has been developed not by Media Molecule but by Sleeping Dogs developer United Front Games. Reviews have been mixed â€“ IGN gave it a mediocre 5.0 while Game Informer thought it was worth an 8.0.

Spy Hunter is also slipping out on 3DS. Despite some fanfare when being first announced, Warner Bros. has since been reluctant to show it off to the press. The PS Vita version was sneaked out last month to mediocre reviews.

Itâ€™s not just Spy Hunter thatâ€™s flying the flag for retro this week. ToeJam & Earl Vintage Collection and Karateka are hitting the download services. Thatâ€™s on Xbox Live Arcade at least â€“ PSN (and Steam) users have to wait until the end of the month for Karateka. Itâ€™s a remake of the game that inspired the original Prince of Persia. Eurogamer has a few screenshots here.