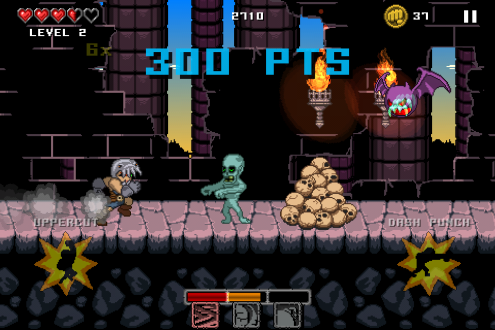 Punch Quest is free. And it’s brilliant. What more needs to be said? Let’s see.

I quite often invoke Jetpack Joyride as a comparison for mobile games, and I’m going to have to again here: from your character bursting through the wall at the start, through the endless running and classy 16-bit graphics, to the three additional goals in play at a time, it’s very reminiscent indeed.

But the genius is that while the structure, furniture and paraphernalia are familiar, Rocketcat Games have applied it to a completely different genre: the scrolling beat ’em up.

With a straight punch, and an upper cut doubling up as a jump, the controls are suitably pared back, but leave a surprising amount of room for combos and special moves. Those specials are bought from the shop and equipped two at a time, the unlocking gently guided by the goals that you’re set.

More specifically, that guidance comes in the form of tiny gnomes which bob around on the goals, leading you to the shop and to the particular special you need to achieve that goal. You can turn into a gnome during the game too. Or jump on a laser spitting dinosaur. Or have massive fists orbiting you. It’s delightfully strange.

Back to the shop: you earn coins through playing, and at such a rate that I always had more than enough for upgrades when I needed them. This is good: no-one likes overly aggressive in-app purchases.

But at the same time, I don’t like not paying for a game when it’s worth paying for. It’s like Rocketcat Games don’t want your money: the shop itself is almost hidden away. But they do want your money: there’s a very appreciative message when you buy coins, and you get a snazzy hat as a reward.

Pocket Gamer had some interesting comments from the developer in the week on this very subject: they have indeed had very few people spending money, and are learning from the experience.