Earlier this year it was announced that Criterion are now behind the steering wheel of the Need for Speed franchise. This more than likely means no more Burnout, but as NFS: Hot Pursuit proved Criterion are able to bring the best bits of Burnout to Need for Speed and make them better experiences for it.

The first review of Need for Speed: Most Wanted â€“ which shares its name with 2005â€™s Need for Speed â€“ was a 9/10 from EDGE which generated a lot of excitement. This was then followed up by an 8/10 from Eurogamer. â€œThis isn’t quite paradise, but it comes very close,â€ they said.

Criterion have focused a lot of attention into the PS Vita version and their promise of a decent conversion seems to have paid off â€“ the first review in is an 8/10 from Pocket Gamer. They note that the graphics arenâ€™t quite as hot as the console versions and thereâ€™s a distinct lack of traffic but still called it an impressive effort.

Weâ€™re pretty sure that a long time ago Ubisoft said that they didnâ€™t want the Assassinâ€™s Creed franchise to become a yearly thing. If that was the case then it hasn’t happened, and the strength of the brand is likely to blame, but there has in fact been three years of development time put into Assassinâ€™s Creed III which makes it Ubisoftâ€™s most ambitious release yet. Reviews suggest though that maybe it has been a little too ambitious.

The Official PlayStation Magazineâ€™s 7/10 review is surprisingly critical and well worth a read. Hereâ€™s a choice paragraph:

“It [also] badly underwhelms in the looks department, at least on PS3. Foliage textures are PS2-level in places â€“ little more than flat, intersecting 2D blobs of green â€“ and the pop-in is ceaseless. Shadows on faces in cut-scenes look like theyâ€™ve been added using the spray can in MS Paint, and shadows on objects draw in and out as you get closer or further away. It must also be said that while Ubisoft has picked an interesting time historically for the game, architecturally itâ€™s as inspiring as a multi-storey car park. Both Boston and New York are bland, blocky and have a depressingly muted colour palette. Itâ€™s a world away from the sun-dappled, burnished beauty of Revelationsâ€™ Constantinople.”

Other review scores, such as EDGEâ€™s 8/10 and Eurogamerâ€™s 9/10, are a lot more positive as a whole but most reviewers do seem to agree that you have to put up with a lot of glitches that really shouldnâ€™t be present. Eurogamer also noted earlier in the week that the multi-player mode has some cheeky micro-transactions in place.

The PS Vita-exclusive Assassinâ€™s Creed: Liberation has also been subject to criticism. “Liberation feels like an unimportant side story in a far more ambitious tale, one that you donâ€™t really need to hear. If youâ€™ve never played an Assassinâ€™s Creed game before, then this is a terrible place to start,” said Venture Beat in their review, where they awarded it a mediocre 55/100. CVG on the other hand thought it was worth an 8.0 but pointed out that â€œthe score is relative to the platformâ€.

The PS Vita also receives Silent Hill: Book of Memories this week but we wouldnâ€™t get too excited if the verdict by The Metroâ€™s GameCentral is anything to go by. They gave it a resounding 3/10: â€œA bad idea, poorly realised. Not only does this sully the already tarnished name of Silent Hill but itâ€™s a tediously poor dungeon crawler in its own right.â€ Destructoidâ€™s review echoed this but they were a bit more generous with the score â€“ a 6.5. 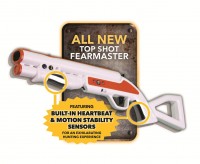 Then weâ€™ve got Cabelaâ€™s Dangerous Hunts 2013 which comes with an intriguing peripheral â€“ a gun that measures your heart rate and then uses this data to adjust the accuracy. It’s also available without the gun if you feel you have enough clutter around the house. It sounds like Activision have put more money into it than previous Cabela games – the storyline has been penned by the writer of The Fringe. Given the series’ reputation though, it would be wise to wait for a few reviews to surface.