Early Dreamcast release The House of the Dead 2 was praised for being arcade perfect, showing that the console could handle arcade conversions with total ease. Lest we forget, the original The House of the Dead never received a decent home version. The Sega Saturn iteration â€“ handled by Australian studio Tantalus â€“ was on the shoddy side and while the PC version was more faithful visually, playing it with a mouse instead of a light-gun simply felt wrong. 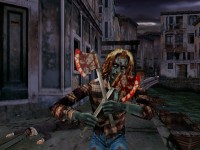 I can even remember saying to a friend prior to the Dreamcast’s release that I wouldn’t feel ripped off if the Dreamcast flopped as it would have given us a perfect conversion of one of the best light-gun shooters of all time.

Like all good arcade games, the first level was relatively easy in order to make you feel like youâ€™ve got your moneyâ€™s worth. The voice acting was cheesy throughout but intentionally so to enforce that B-movie feel. The House of the Dead 4 saw the series come full circle in this respect, being based on a spoof zombie movie. 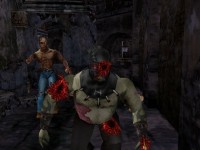 The undead were satisfying to shoot â€“ juddering and jolting as you emptied hot lead into them. It wasnâ€™t just zombies that players were tasked with blasting though. There were also cybernetic monkeys, zombie owls, monsters covered in green moss and more besides. Being skilled with headshots wasnâ€™t always going to save you here â€“ some enemies had to be shot in their exposed chest areas, while others had large objects ready to be thrown unless you shot them out of their hands first.

Being an arcade game there were a few sneaky ways to try and rob you of your precious credits. Some zombies would throw axes that were very tricky to shoot out of the air. Youâ€™d also come across groups of leach-like enemies that would squiggle about, making them hard to shoot, before leaping into your face and leaving a bite mark on the screen. Then there were the chainsaw zombies, whoâ€™d rush at you at lightening pace. 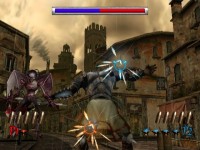 The bosses were an assortment of huge beasts that required quick trigger fingers. At the start of each boss battle the boss’s weak point was shown and it was worth noting these as they weren’t always obvious. The first boss was a decapitated knight with an axe but the weak point was actually the little flying demon that whizzed around him. The way that your gun cast a light on the wall during the third-boss battle â€“ a giant multi-headed hydra â€“ was one of the many little touches that we found clever back in the day.

There were ways to boost your health to get through the more difficult sections. Survivors needed saving and youâ€™d get just a few seconds to shoot the zombies about to sink their teeth into them. After youâ€™d learnt their locations and discovered the best order in which to take out the attacking zombies, it was possible to get quite far into the game without using additional credits. Multiple routes also featured some of which required interaction to take, such as shooting a key found on the ground which could be easily missed. 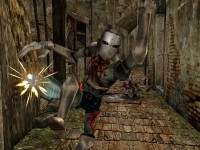 The Wiiâ€™s The House of the Dead 2 & 3 Return is by far the easiest way to get the House of the Dead experience. Unlike the Dreamcast version you wonâ€™t have to shell out for an additional light-gun and itâ€™s a faithful conversion with some thoughtful extras. Die often and eventually the option to add another credit onto the total will become available, you of course get The House of the Dead 3 to play through too. Itâ€™s slightly lacking in soul, but there are more enemies on screen at once and shooting them to bits with the new shotgun weapon is quite pleasing. If you havenâ€™t guessed, we’re not massive fans of it. 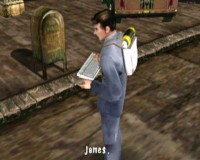 Those who want to take the experience further are also recommended to try out The Typing of the Dead on Dreamcast and PC. Itâ€™s The House of the Dead 2â€™s text-based cousin and believe it or not this did get an arcade conversion, keyboard and all. The PC version is quite hard to find but the Dreamcast version â€“ which wasnâ€™t released in Europe â€“ is easy to source. Dreamcast keyboards are as common to find as they once were (they were even in Poundland at one point) but shouldnâ€™t break the bank. One fun fact about this game is that the characters have Dreamcasts strapped to their backs. A fun typing game? God bless Sega.