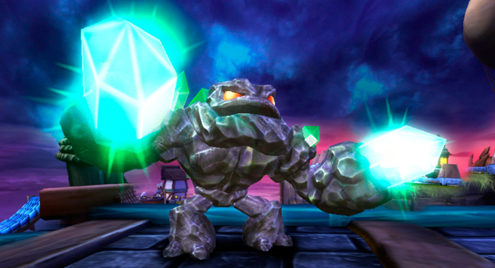 A lot of parents are going to be pestered for a temporary raise in pocket money this week â€“ Skylanders Giants is out on Wii, 3DS, PlayStation 3 and Xbox 360. 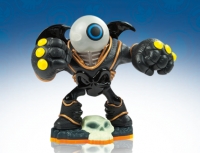 The new giant figures, like Eye-Brawl on the right there, cost Â£14.99, while in addition to a new range of smaller figures there are also the new Light Core models that light up when placed on the Skylanderâ€™s portal. These too are more expensive than the standard. We pity those poor, poor, parents.

GAME has bagged an exclusive bundle which comes with glow-in-the-dark figures and portal. Thereâ€™s also a PlayStation 3 Slim bundle for Â£229 which contains the 12GB console, a copy of Skylanders Giants and a figure with an exclusive paint job.

If you already have the original Skylanders then itâ€™s just the booster pack that you need. Newcomers will require the starter pack. 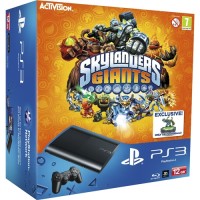 If you can hold out, the Wii U version is said to be the definitive package, offering the best visuals as well as some touch-screen mini-games such as a card battler. Online retailers donâ€™t appear to have it to pre-order just yet though.

Activision are also releasing James Bond: 007 Legends this week. Review scores have been so poor that weâ€™re surprised Activision have let the press review it before release. Game Informer gave it a 4/10, branding it very cheap looking, while IGN gave it 4.5 claiming that it suffers from poor presentation and that the concept isnâ€™t very good either. No doubt itâ€™ll sell well though seeing as it has the hype for Skyfall to fall back on.

Then weâ€™ve got the not-quite-full-price DOOM 3 BFG Edition. As well as DOOM 3 it also contains DOOM and DOOM II. DOOM 3 now features new lighting effects (the main character now has a suit of armour that lights up the environments), an improved save system and an extra mission pack. You should be able to find it for around Â£24.99 online. GAME tweeted in the week that anybody who pre-orders it will receive a free copy of RAGE.

We’re curious as to how well Dance Central 3 is going to sell. With Fable: The Journey arriving at #37 in the UK chart and Harry Potter for Kinect failing to even make the top 40, we’re starting to wonder if the Kinect bubble has burst. There’s no doubting that it won’t be a good game though – the Dance Central games have been some of the Kinect’s finest.

The Unfinished Swan is this weekâ€™s download-only highlight. Itâ€™s a PlayStation 3-exclusive artistic endeavour which has been in development since 2008. Reviews have been mixed, ranging from 9.0 from IGN to 6/10 from Eurogamer. Itâ€™s a little on the short side but beautiful while it lasts. Xbox 360 owners get Zombie Driver HD for 800 MSP, while 3DS owners can download extra Mutant Mudds levels this week for no additional cost. Itâ€™s a pretty decent platformer if you havenâ€™t considered downloading it yet.