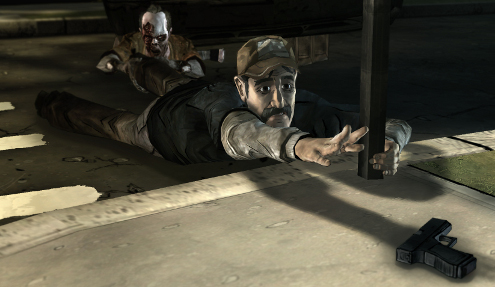 The subtitle for episode four of Telltaleâ€™s adventure series refers to the fact that the survivors have finally arrived in the city of Savannah, only to be greeted by more zombies than they could have ever imagined. There really is one around every corner, making this the most action-heavy instalment yet.

Donâ€™t expect to be knee deep in the dead from the start though as itâ€™s also the slowest burning episode so far. Episode two started with a scene designed to shock while episode three provided some tough decisions to make. Here, youâ€™re simply tasked with finding a way into an abandoned house before double checking that it really is abandoned.

Sticking to their plan of finding a boat to get off the mainland, lead character Lee and fellow red-neck Kenny then head towards the docks. It doesnâ€™t take long for the duo to realise that Savannah isnâ€™t exactly bursting with much needed supplies. The whole city has been stripped bare – even the abandoned cars that litter the streets have, rather oddly, had their engine parts removed. Itâ€™s at this point a new character is introduced who soon fills you in with whatâ€™s been going on. Predictably, it isnâ€™t good news. Things get even worse for Lee who shortly after finds himself separated from the rest of the group. The atmosphere in this section is incredibly tense in places. So much so that even the sound of an achievement unlocking made us jump.

The second half the adventure sees a change of scenery and is a lot more action-orientated. There are no less than three sections where you have to pump some lead into hordes of zombies from a first person perspective. Several button-bashing action sequences which are rather frantic feature too, and you also get to witness episode fourâ€™s newcomer get stab happy with their trusty mountaineering axe.

While this episode has the highest zombie death count so far, itâ€™s also a bit lacking in brains. Thereâ€™s just one puzzle on offer which is so easy it can barely be described as a puzzle at all. There isnâ€™t much sense of progression in the storyline either, giving the impression that Telltale are saving the big surprises for the grand finale.

In many ways it reminded us of an episode of Lost, generating more questions than it answers before ending abruptly on a cliff-hanger. Itâ€™s not a bad experience by any means, but whereas we found previous episodes to be thoroughly excellent this one weâ€™d only describe as being â€˜pretty goodâ€™ due to leaving us feeling a little discontent.

One thing is certain though â€“ with so many questions left to answer thereâ€™s no way episode five can be any less than brilliant.