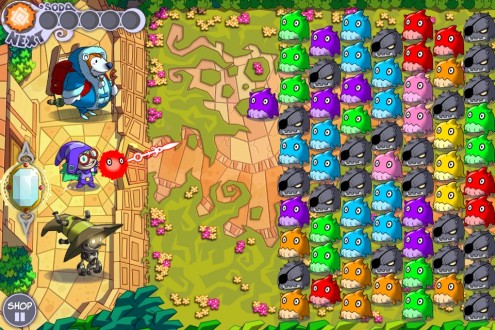 The idea of Supermagical is neat: whack a story and some light RPG elements onto the classic bubble-popping game. It looks and sounds fantastic. What a shame, then, that the game goes out of its way to make playing it a real bloody chore.

Turning the classic mechanic on its side makes absolutely no difference, but all the stages are designed, rather than endless random bubble-popping. All good and well, except if you need to go back and replay stages, in which case it’s quite repetitive thank you very much. And you will need to replay stages, to collect enough coins to keep making progress.

Yes, money is tight. The game’s shops have all sort of handy goods on offer: special items to use in and out of stages, upgrades, ingredients for spells – and things that you need to enter certain levels. Which mean, at numerous points in the game, you have to pay a fee to continue playing. If you’ve just been tempted to indulge in an upgrade and wiped out your savings, then, well, tough. Cough up for a micro-transaction, or churn away.

Now, I don’t mind paying for my games, but particularly when I’ve paid upfront for the game in the first place, I’d prefer to be encouraged to splash some pennies to make my life easier, rather than being held to ransom. It’s just rude.

Alas, that’s not the only complaint. You can only move between adjacent stages on the map – unless you buy a special item. Which shop is that item to be found? You have to remember, or check each one in turn – unless you want to pay for a special item that tells you what’s on sale where, of course. Making the game downright annoying to encourage micro-transactions is, again, just rude tadalafil otc.

All of which is, as I said, a shame – because there’s charm oozing out of the rest of the package. There are a few different styles of stage – where you’re limited to a specific sequence of bubbles, for example – and neat conversational ‘boss’ stages, where choosing the wrong response is punished with a bit of enforced bubble-popping. And within the core game, you get to choose two of several special powers at any given time, and can use sweets to change the colour of the bubble at hand.

You know what would have helped? An endless play mode where you could happily churn the day away. Ho hum.