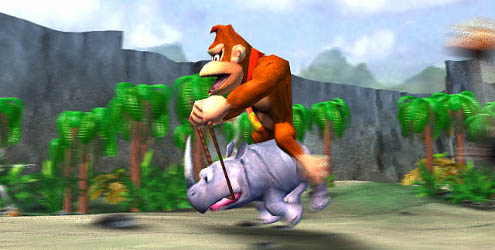 As well as talking about their new iOS, Android and PlayStation Mobile game Twist Pilot, Not Enough Shaders were also able to squeeze a few tidbits from their former days.

Steve Ellis revealed that TimeSpiltters 2 HD was once in development:

“We had a ‘HD’ downloadable version of TimeSplitters 2 in development at Free Radical in 2008. I donâ€™t know what happened to that but yes, Iâ€™d love to see it released at some point.”

He does also point out that Crytek owns the TimeSplitters license, so donâ€™t get your hopes up.

Lee Musgrave also managed to clear up what happened to Donkey Kong Racing, which was in development for GameCube during Microsoft’s acquisition of Rare:

“Donkey Kong Racing was obviously pretty heavily tied to Nintendo as a franchise, and as Rare approached the finalization of a buyout deal with Microsoft it was clear that the game had no future, at least with the apeâ€™s as characters. We switched it around to be a Sabreman game, and there was a great early Xbox prototype â€“ but someone, somewhere decreed that it was a little too old-school for the kind of â€˜revolutionary gaming experiencesâ€™ that the Xbox was capable of delivering, and so it started down a path of meandering changes, updates and â€˜evolutionâ€™ that finally saw it run out of steam and fall over. There were some great ideas in the game as it developed though, and I still look back to the early racing game design and think we could have done something great with that.

“It was a pure racing game, the underlying software mechanics were actually based on car physics, but it also incorporated the idea of riders jumping between different animals mid-race, to always be riding the ones that were bigger or faster . . . we had some awesome gameplay in place, and it was lots of fun â€“ we even had a multiplayer version working â€“ and when you fell off, you had to tap-tap-tap (HyperSports style) to run on foot and catch up with an animal. Fun, but it lost some appeal without the DK universe around it, and Microsoft were unsure of its potential with Xbox gamers I think.”

The interview is well worth a read. Even the cancelled Jet Force Gemini game for Game Boy Color gets a mention.