The Nintendo DS wasn’t the first handheld to feature a touch-screen. Back in 1996, Philips planned to release a touch-screen handheld aimed at girls called the In2It, also known as Kidcom during its pre-production. 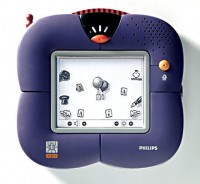 Despite extensive focus testing, which entailed groups of children providing sketches of their ideal handheld and – somewhat bizarrely – also writing stories in which the final product was somehow involved, Philips cancelled the handheld due to market conditions.

Itâ€™s estimated that around 100 units were produced and just five of these were released to the public as part of a focus testing exercise. One of these known five has now found its way onto eBay.

It comes with a box and manual â€“ two things usually missing when units have appeared on eBay in the past. The seller claims that the built-in software includes music and drawing programs, an alarm clock and a calculator. Other websites suggest that software for sending e-cards to other users via the systemâ€™s infra-red port was included in test units.

Additional software would have come on credit card-style cartridges, including a Boyzone fact file and a board game (dominos, noughts and crosses, etc) compendium.