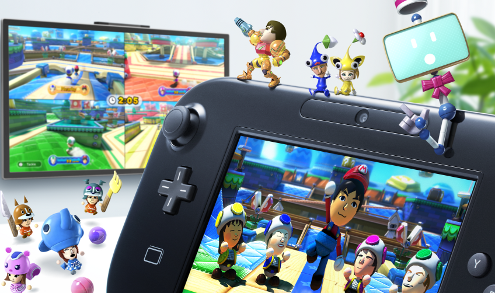 If variety is the spice of life then Nintendo Land is a vindaloo with extra chillies. Weâ€™re not just talking about the variety of mini-games present but also the variety of controllers required. Aside from the touch-screen GamePad, some games require just a standard Wii remote while others need a Motion Plus-enabled Wii remote. Havenâ€™t upgraded to Motion Plus yet? Bloody hell, granddad.

Luigiâ€™s Ghost Mansion and Animal Crossing Sweet Days do appear similar on first glance due to a top-down and maze-like design, but actually couldnâ€™t be more different from one another.

Animal Crossing Sweet Days sees four players forage for candy thatâ€™s found growing on trees while a fifth player, armed with the GamePad, controls a pair of guards. Guards clutching oversized knives and forks, no less. Communication is the key â€“ there are a few trees on the map that one player alone can nab candy from, but most need to be shaken by two or three players. The more candies a player eats the fatter and slower they become. Once 50 sweets have been gained, the game is won.

Itâ€™s the GamePad holderâ€™s job to stop this from happening. Now hereâ€™s the brilliant part â€“ this player controls both guards at once, via each of the analogue sticks. It feels a little odd at first â€“ imagine playing something like Geometry Wars with two ships under your control – but the idea soon clicks. The camera pans out if the two guards start heading in different directions to give a wider view. Guards can also jump and then dive to give them an advantage. Nintendoâ€™s idea to force players to communicate to succeed really shines here. Itâ€™s a lot of fun.

The action in Luigiâ€™s Ghost Mansion â€“ which we dubbed Luigiâ€™s Pac-Mansion during its E3 showing thanks to the similarities with the oft-forgotten gem Pac-Man Versus â€“ takes place on just one screen. The GamePad holder controls a ghost while the other four players take control of Miis dressed as Luigi, each armed with a torch. Predictably, the ghost has to sneak up on the other players. Once scared poopless the Luigi-clones fall to the floor until revived by a friend. This does however leave the healer open to attack.

As the ghost draws near the Wii Remote starts to rumble. Again, communication is the key â€“ if a player lets others know when their remote is rumbling, then thereâ€™s time to regroup to attack. Torch light damages the ghost â€“ who has 100 HP â€“ but use of the torch drains the battery. Additional batteries do appear at random but again, heading off to get one instead of staying in a group will make you a vulnerable straggler. Itâ€™s a really well balanced game of tactics and the way that lightening outside occasionally lights up the mansion for a few brief seconds to reveal all, is a nice touch.

The Legend of Zelda: Battle Quest and Takamaruâ€™s Ninja Castle share a less blatant similarity â€“ both have hand-crafted style textures, much like Kirbyâ€™s Epic Yarn.

The Legend of Zelda: Battle Quest is viewed from third-person and involves three Miis dressed in Link outfits, armed with swords and shields, while the GamePad player acts as an archer and must activate switches to open drawbridges and so forth. Instructions for the demo we played were straight to the point: â€œFight through the forest.â€ Itâ€™s not going to make up for the lack of a launch day Zelda game, but it is entertaining.

Takamaruâ€™s Ninja Castle â€“ based on a Famicom game released only in Japan â€“ features beady-eyed origami ninjas of different colours. This mini-game is single-player only, requiring the GamePad to be laid flat on the palm of the playerâ€™s hand. To calibrate, three ninja stars have to be thrown at a drum by swiping the touch screen at the start of each round. Itâ€™s a simple game of aiming and shooting thatâ€™s less complex than even Linkâ€™s Crossbow Training, but thankfully there is an accuracy rating leaderboard and a combo system in place. Simply miss a shot and the combo meter resets back to zero.

Due to its basic nature we canâ€™t imagine anybody getting hours upon hours of play from this mini-game, leaving the single-screen puzzler Donkey Kongâ€™s Crash Course a more viable option for those playing on their lonesome.

What we’ve played so far has been less than half of the Nintendo Land package – just five games of the proposed 12 – but that was enough to tell us that this is a hefty cut above other mini-game collections out there.

Wii Sports may not have been the best game ever but the Wii couldnâ€™t have launched with a finer piece of software. It helped to get the console into millions of homes thanks to its pick-up and play nature. This game does a sterling job of introducing players to the GamePad, but if Nintendo hopes that it will perform a similar favour for the Wii U as Wii Sports did to the Wii, theyâ€™re going to have to pull off a marketing miracle. Golf, tennis and boxing are things anybody can instantly grasp and understand. Chasing for sweets, searching for ghosts and running around as Samus Aran are somewhat less so.