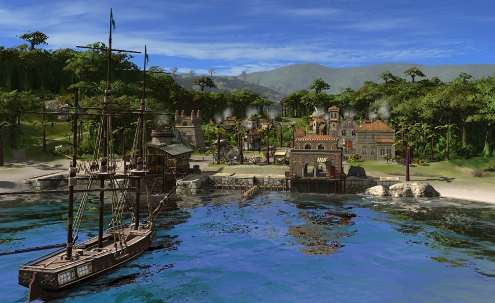 If thereâ€™s one thing we have learned from videogames over the years, itâ€™s to always attack the red flashing spot. That, and the fact that itâ€™s always the games with a steep learning curve that end up being the most rewarding. To say that Port Royale 3 is initially confusing is an understatement – the tutorials are overwhelmingly text-heavy and having countless menus shoved in your face from the word go isnâ€™t quite what gamers are used to these days. Console gamers, especially.

Once everything clicked into place though Port Royale 3 proved to have something of an addictive streak. Two modes are available, one offering the life as a trader and the other the life of a pirate. The two arenâ€™t massively different â€“ both use the same 2D map and even share a few of the cut-scenes – but the mission objectives do vary. Thereâ€™s no need to worry if you think youâ€™ve made the wrong choice, because when playing as a trader you can still attack other ships and try to take over towns.

We found the first couple of hours to be a bit on the slow burning side, right to the point where our initial impression was unfavourable. You have just one vessel at your control and are instructed to simply travel from port to port, buying goods at low prices and then selling them for as much as you can at other docks. Each town specialises in the production of certain goods and quite often the mayor will offer some extra gold if you bring them materials theyâ€™re in dire need of. Every town has a tavern too, where youâ€™ll find pirates willing to sell treasure maps or sometimes plundered goods.

After gaining enough money for an extra vessel itâ€™s possible to plan routes for your ships so they can go about their (well, your) business on autopilot. Once you have a few automated routes going the money quickly starts to flow. You could in fact just sit back and let the game play itself if you really wanted.

It was the mission that occurs around three hours in that really helped to grab our attention. The titular Port Royale is your home town but the story soon shifts to the Cayman island. Youâ€™re told that in order to win the heart of the Kingâ€™s daughter you must lead Cayman into prosperity. Here, the city-building aspects come into play. You can build houses and earn income from rent, set up warehouses, build bigger docks to acquire bigger ships and more besides. Construction requires wood and bricks so a steady flow of these is required. From this point onwards everything became a whole lot more engaging.

The storyline for the trader adventure took us around five hours to finish. Once completed the game turns to a free-play mode and is in fact far from over. Thereâ€™s a bonus mission to complete that entails procuring goods for a wedding before finally marrying the Kingâ€™s daughter. After this our line of thought had turned to war and so we used our immense wealth to create convoys of warships to try and take over towns. Attacking towns reduces reputation with other nations, and if you arenâ€™t careful they wonâ€™t let you dock at all.

Itâ€™s a good job that battles can be automated as theyâ€™re pretty tedious affairs. Crank up the speed settings and itâ€™s like something out of The Benny Hill Show with vessels sailing around in circles at breakneck speeds. You can choose an ammo type and also board a vessel when up close but thereâ€™s not much in the way of tactics. Attacking pirate strongholds is a slightly different experience. Some strongholds are home to over a thousand pirates and if your convoy is carrying a significantly lower amount â€“ which chances are is likely â€“ then youâ€™ll have to gradually wear down their defences, returning with a fresh supply of seamen every visit. Oh, stop laughing at the back there.

Due to being as slow burning as a candle made out of lead, Port Royal is a tricky one to recommend in a day and age when most games offer instant gratification right from the start. If youâ€™re prepared to put in the effort and fancy something a little different though, then itâ€™s worth considering.