Iâ€™m sure every gamer has dreamed about owning an arcade machine at some point. To the infuriation of girlfriends and significant others across the world, a little known website known as eBay exists. The really worrying thing is that some arcade machines donâ€™t really cost a great deal â€“ weâ€™ve managed to find working machines for around Â£100 in this monthâ€™s eBay round-up.

Weâ€™re starting this round-up with the machines that have sold for a lot more than that, though. 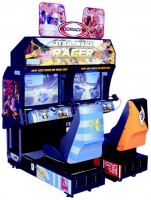 Leading the way is Segaâ€™s Star Wars Episode One Racer twin cabinet from 1998 which sold for Â£2,000. We hope the buyer had access to a lorry of sorts â€“ it was a collection only auction.

Another Star Wars game next: a sit-down Star Wars Trilogy machine which sold for Â£815 (8 bids). Youâ€™ll notice a continuing theme throughout this feature â€“ Sega pretty much made all of the games mentioned.

Not this one, though. A Defender cabinet which sold for Â£560 (15 bids). We hope buyers read the description carefully â€“ it had been â€œconverted to MAMEâ€ while the CRT had been replaced with an LCD. This Pac-Man cabinet hadnâ€™t had its contents gutted and stripped and ended up selling for less – Â£365 after 7 bids.

Back to Sega – Â£510 (21 bids) was the price this House of the Dead III machine sold for. Another Sega shooter sold for not a particularly bank-breaking amount too â€“ this colourful Gunblade cabinet went for just Â£300 (13 bids). Selling for a similar figure was this Area 51 shooter from 1998, which ended at Â£320 after 5 bids.

A single player only Need for Speed netted Â£350 (17 bids) but it wasnâ€™t in working order and went only for spares and repairs. This Sega Suzuka 8 twin motorbike racer was up and running though and sold for Â£250 after just one bid. Our local arcade still has one of these, hidden down the back somewhere.

That Â£100 system we mentioned at the start of this article? A fully working Tekken 2 machine in a generic cabinet which attracted one bidder. It doesnâ€™t appear to be in the best of condition, but at Â£100 it would be hard for anybody to complain about that.