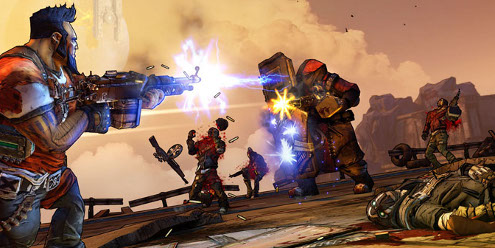 Borderlands 2 has been creating a buzz ever since it was first announced.

Reviews suggest the hype hasnâ€™t been for nothing. UK magazine GamesMaster had the first review, where it bagged a resounding 95%. That was then followed up with a 9.0 from IGN. â€œBorderlands 2 preserves the best parts of the franchise while also making numerous, much needed improvements to areas like narrative and class skill design. Additional visual customization options would make it better, and the occasional technical issue takes away from the experience, but overall this is an excellent shooter no one even remotely curious should overlookâ€, they said.

According to 2Kâ€™s blurb there are now 87 bazillion different weapons. The Simpsonâ€™s Moe Sizlack would approve.

As well as the standard version thereâ€™s a collectorâ€™s edition that comes with a bobblehead, stickers and an artbook. GAME was also offering the â€˜Ultimate Loot Chest Editionâ€™ which comes in a replica loot chest but thatâ€™s now sold out.

IGN has an unboxing video, if youâ€™re a fan of those.

If the reviews of Pro Evolution Soccer 2013 are to be believed then the series is back on top form. IGN gave it 8.5 claiming that it â€œfeels like a game with a sense of identity and directionâ€. The Official Xbox Magazine meanwhile gave it an 8.0, pointing out the improved player control and visuals. Thereâ€™s not one but two demos available to try out. A FIFA 13 demo is also available now for those who want to compare the two.

F1 2012 reviews appeared on Monday too. Eurogamer found it to be good, but not a massive improvement. â€œIt’s another small step forward for the series, but that’s not quite enough to dispel the suspicion that Codemasters’ F1 team doesn’t have the resources to create iterations compelling or different enough to justify the annual churnâ€. They award it a 7/10. Videogamer.com liked it a bit more, giving it an 8/10. They did agree though there hasnâ€™t been any major changes this year.

Having already been released on the original PSP, in our eyes the PS Vita version of LittleBigPlanet consequently doesnâ€™t quite feel like a system seller. Itâ€™s still worth a look though. EDGEâ€™s 9/10 review has vanished off the face of the internet, but they did say that the â€œ5 inch OLED screen is a chance to see Media Molecule’s staggering achievement afresh, and to witness one of this generation’s most intriguing engines of creativity at its most energetic and effective.â€ It has received plenty of other 9/10s too, such as this one from Polygon. GamesRadar didnâ€™t enjoy using the rear touch-screen very much, but still gave it a glowing review.

Then we have a trio of less than full-price releases – The Testament of Sherlock Holmes on PS3, 360 and PC, Funky Barn on 3DS and the Xbox Live Collection Pack from Ubisoft. That last one contains Beyond Good & Evil HD, From Dust & Outland and can be found for around Â£14.99 online. All three are very good games, although since the pack was first revealed (way back in January) all three have been on offer at various times on XBLA at vastly cut prices.

Kinect Sesame Street TV and Nat Geo TV also cost less than your standard release. Oddly, the online retailers claim that theyâ€™re out today (Tuesday). Nat Geo TV is by Brighton-based Relentless Software, who created the Buzz! series for Sony while Microsoft Soho is responsible for Sesame Street. Theyâ€™ve got quite a job on their hands to better the surprisingly good Once Upon a Monster.

As for downloads, XBLA owners get Jet Set Radio HD and Fire Pro Wrestling (out Friday) while 2D adventure game LA-MULANA arrives on WiiWare. Thereâ€™s a trailer of that here. The publisher behind it is also releasing Abyss on DSiWare this week, which looks a bit like an underwater version of Thurst.

We think we would rather have had Fire Pro Wrestling in 2D, like the older versions, but weâ€™ll reserve judgment for now.