If youâ€™re anything like us, then youâ€™ll have suspected that the claw games – or UFO catchers, as theyâ€™re known in Japan – are rigged. It may even be common knowledge to some that they’re designed to not grip the goods inside properly every time.

It’s not such common knowledge, however, that the user manuals for various crane games are available online, which clearly show how the chances of winning can be altered.

Or at least we hope thatâ€™s the case. This article would be kind of pointless otherwise.

Itâ€™s entirely up to the arcade owner to decide how often the claw will have a strong grip. How the odds can be altered really is quite amazing. The default factory setting for this machine is to only give the claw a strong grip every 1-in-18 games. This can be changed by the arcade owner from a mildly generous 1-in-3 games all the way up to 1-in-54 games. Fifty four.

Most machines can also be set so that theyâ€™ll grip a prize tightly, and then loosen their grip after a set period of time. Iâ€™m sure weâ€™ve all seen a prize fall from a claw’s grasp just as itâ€™s about to drop into the chute. The options for this start as low as 2 seconds after grabbing a prize and go up to 25 seconds.

Game time, crane delay and the chances of getting a free game can also be altered. 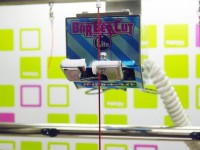 Also of note are those newer ‘Barber Cut’ machines where the idea is to cut string holding a prize via a pair of mechanically controlled scissors. Again, a variable strength can be chosen by the arcade owner so that the scissors only have enough power to cut the string every so often. So much for it being a skill game.

Some scallywags have found a workaround though â€“ using high powered lasers, often imported illegally from China, to cut the string through the glass. Namco was quick to inform all owners of these machines that they should only use certain coloured string to prevent this from happening.

Thankfully not all crane games are out to grab your money. Segaâ€™s UFO catchers have no variable strength. They can be set to weak or strong, but players do at least have the same odds of winning every time they play. Fair play to Sega, there.

There are also those crane games that cost Â£1 or Â£2 a play but guarantee a prize every time. Have you seen the prizes inside them though? They look like a chimpanzee made them.