Mobile games are released at such an unrelenting rate, that I don’t generally find pre-release coverage very helpful. If I can’t click through and buy it immediately, then there’s every chance I’ll have forgotten about it by the time it’s released. But it’s been a pretty lovely week for announcements. 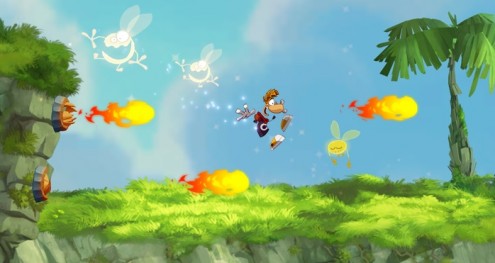 Everyone loves Rayman Origins, and it’s to Ubisoft’s credit that they’re not going to try to convert it to mobile. Instead, they’re using the same luscious UbiArt framework to create a new outing specifically for touch screens.

Going by the trailer, Rayman Jungle Run is going to be similar to the treasure chase bonus levels in Origins. It looks like it will be an auto-runner, with the jumping, swinging and punching you’d expect from everyone’s favourite French limbless platform star.

If the levels are anything like as expertly crafted as in Origins, and the controls are sensibly implemented, we’re in for a bloody treat.

Release isn’t far away: 20th September for iOS and Android. It’ll be interesting to see the price, but I’d imagine it’ll be more Chillingo than Square-Enix.

It’s hard to know what to make of Year Walk, the latest offering from Beat Sneak Bandit developer Simogo. As you can see, it’s strange and intriguing. So, let’s resort to recycling some of the developer’s words:

“Venture out into the dark woods where strange creatures roam, in a vision quest set in 19th century Sweden. Control and interact with the world, objects and creatures in every way you can think of in your search to bend the rules of the universe and open the rift that separates our world and what lies beyond it.”

I couldn’t have put it better myself? Curious – in a very good way. Matters may be clarified when it’s released on iOS sometime this winter.