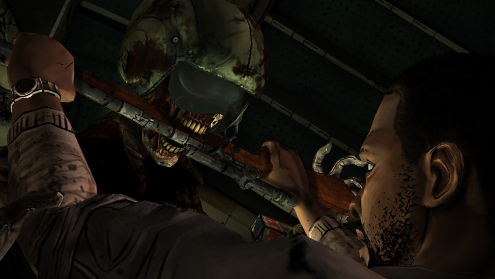 This year has been full of surprises, but none have been more pleasant than Telltaleâ€™s The Walking Dead series. The first episode proved that the point-and-click adventure genre still has plenty of untapped potential â€“ had this series been handled differently, we donâ€™t think it would have ended up being as tense or as exciting. Episode two then gave us a mystery to solve and many moments that we wouldnâ€™t be forgetting any time soon.

Youâ€™d think that by now Telltale would be starting to run out of ideas, or perhaps the plot would start to become drawn out or have too many loose ends, but this thankfully isnâ€™t the case.

As the subtitle suggests, the group of not-quite-so-merry survivors are hitting the road. The motel which theyâ€™ve been using as a safe house becomes compromised, and so they find themselves leaping into the back of a motor home without time even to grab their belongings or supplies. Tension between the group is at an all-time high â€“ a thief has been stealing valuable supplies while the protagonistâ€™s shady past has finally caught up with him.

Episode two opened with a grizzly scene designed to shock. This time round youâ€™re forced to make a difficult moral choice no less than five minutes into the game. This is then followed by a fast-paced action sequence, which helps to draw you in right off the bat. New faces appear towards the end and their arrival helps to keep interest levels up, plus the questions that they ask give food for thought as to how good a job Lee is doing looking after Clementine â€“ a child which isnâ€™t his own.

The zombie body count is higher than before thanks to one sequence where Lee has to grab his rifle and attack a zombie horde on his lonesome. The moral choices are tougher than ever before too â€“ there are moments that had us overcome with real emotion. Did you cry when Aeris died in Final Fantasy VII? Then you better have a tissue at hand when playing this.

As before the controls are intuitive and the sound issues that occurred in episode two have been cleared up as well. Puzzles remain pleasingly logical, providing you remember to search every single area thoroughly.

Like we said when reviewing the previous episodes, Telltaleâ€™s pricing is perfect. Each episode only lasts around three hours, but at 400 MSP (around Â£3.50) thatâ€™s still cheaper than renting a movie from Blockbusters and about three (or four) times cheaper than going to the cinema. If you decide to play though an episode twice in order to see all possible outcomes, then they become especially good value for money.

Episode two is still our favourite of the three of the five episodes due released so far, thanks to it having a self-contained storyline and a sense of mystery, but thatâ€™s not to say that Long Road Ahead is a disappointment. Telltaleâ€™s confidence with the genre is clear for all to see and just when we thought their story-telling skills couldn’t become any more defined, theyâ€™ve somehow managed to outshine themselves.