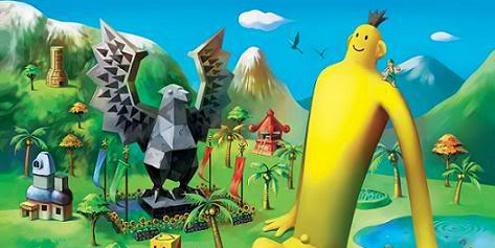 Our four part â€˜forgotten heroesâ€™ series draws to a close, but you may have noticed that this one is different from the rest. Rather than focus on Nintendoâ€™s forgotten heroes we decided just to look at those from the N64 era.

Itâ€™s a system that we donâ€™t talk about much on Games Asylum, even though weâ€™ve been around for so long that some of our first reviews were of N64 games. Hey, weâ€™re not old. Weâ€™re retro.

Itâ€™s hard to imagine it now but when the N64 was fading away, THQ was one of the major publishers for the system putting out new titles almost every month, and even picking up Conker’s Bad Fur Day after Nintendo washed their hands of it. Aidyn Chronicles: The First Mage was one of THQ’s last N64 games to be released and because of this it can now sell for a handsome amount.

The story was penned by Angela Ferraiolo and saw a young squire named Alaron out to try and remove a curse. Itâ€™s a very ‘olde worlde’ affair â€“ other characterâ€™s names include Godric, Keelin, Becan and Brenna, while at one point Alaron is befriended by a jester who then turns out to be a wizard. We do believe this is how most people died in the 15th century.

Does it really matter what a main characterâ€™s name is? Of course not â€“ itâ€™s how a game plays that counts. We recall being very amused to hear that the name of the mage apprentice in this early N64 RPG was called Brian, though.

This was in the US version, at least. In PAL countires he was known as Ayron while over in Japan he went by the name of Jean-Jacques. Holy Magic Century was a game that very much went from pillar to post, with different names and publishers in each of the three territories. THQ simply called it Quest 64 for the US release. Great effort, there.

A Game Boy Color spin-off also exists, but instead of being an RPG it was turned into a middling Mr Do clone.

Oh look â€“ itâ€™s another N64 character with an odd name. This blue chameleon was the star of Chameleon Twist and its lesser known sequel.

This platformer also had alterations made before being released outside of Japan. In the Japanese version of the sequel, Davy looks nothing like a Chameleon, resembling a deformed version of Bomberman. Davy then received a redesign for US and Europe, making him appear more lizard-like.

Take a look at the differences in box-art for the Japanese and PAL versions.

Heâ€™s a chubby builder in a hardhat. Thatâ€™s pretty much all there is to know about the star of Charlie Blastâ€™s Territory.

There is a little bit of history behind this game, however. The PSone version was known as The Bombing Islands and stars Kid Klown, a character best known for Kid Klown in Crazy Chase for the SNES. For the N64 version Kemco handed the reins to the US studio Realtime Associates who changed the main character and also added a battle mode.

Reviews were pretty mediocre, which is probably why Charlie Blast isnâ€™t too well remembered.

Games based on studio mascots are more common than you may think. Titusâ€™ fox starred in Titus the Fox, Amiga shooter Agony featured the Psygnosis owl, and Haven almost had Travellerâ€™s Talesâ€™ rabbit as its main character.

It was Iguana Entertainmentâ€™s iguana mascot who had pride of place in Iggy’s Reckin’ Balls. Itâ€™s a hard game to describe â€“ a racing game in which the tracks are set inside towers and viewed from a side on perspective. Actually, that wasnâ€™t too hard to describe after all.

Acclaim made Iggy look a whole lot cuter for the Japanese release, giving him baby-like features.

Does the Donkey Kong Rap offend your ears? Best not listen to the UK garage track by Justin Scharvona at the start of Buck Bumble, then.

Developed by Argonaut, of Starfox fame, this should have been amazing. Instead itâ€™s remembered for being notoriously tough. It was set in 2010, in which a chemical spill had mutated insects who were now trying to take over the world. Buck Bumble had the advantage over the other insects though, due to being implanted with cyborg technology.

In the UK, Dixons bundled the game with an unofficial yellow and black striped rumble pack which probably helped it bag a few extra sales. 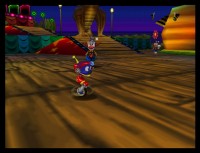 Thereâ€™s a little bit of history behind this one too. It was the first game to be developed by Sucker Punch, the studio best known now for the Sly Raccoon and Infamous games. It was also very nearly called Sprocket, but due to copyright reasons it ended up being called Rocket: Robot on Wheels.

Reviews were very positive but it was released during a very busy period (Christmas 1999) and so it did end up being overlooked by many. Not just by the public but by the press, too. A couple of months after it was released, EDGE magazine pointed out that they regretted not reviewing it.

The physic-based puzzles were way ahead of their time, while other puzzles saw the titular robot having to mix pools of paint to create a camouflage pattern in order to sneak past some guards. Weâ€™d love to see a remake of this, but chances are itâ€™ll never happen.

Doshin the Giant is best known for his appearance on GameCube, but the yellow fellow did star in a couple of N64 DD games before hand.

Itâ€™s a game thatâ€™s not too unlike Bullfrogâ€™s Black & White, with the idea being to control a God-like creature who can influence the humans around him by being either good or evil. Turning evil transformed Doshin into Jashin, a red-hued foe with a menacing grin. The idea was to force the population into creating a long list of statues either out of love or fear. If you like games that are a little bit different then the GameCube version is worth tracking down.

Amusingly, the full Japanese name of the 64 DD spin-off is Doshin the Giant: Rescue from the Front by the Toddlers that Tinkle at the Large Meeting-hall. Contender for the best game never ever? Absolutely.