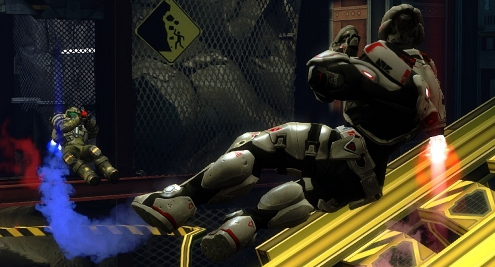 Thank goodness for downloadable games. If it wasnâ€™t for the ability to buy new games from the comfort of your sofa or toilet, then this weekâ€™s new release round-up would make for very dull reading.

The belated PC version of The Amazing Spider-Man is this weekâ€™s only retail release. Hereâ€™s a fun fact: the PC version of Spider-Man 2: The Movie was incredibly simplified when compared to the rather decent console versions. You could even say that it was a kidâ€™s version of the game, despite the back of the box not suggesting so. The age of the average comic book reader is currently higher than ever, so we very much doubt Activision has made this mistake again.

Hybrid is Microsoftâ€™s â€˜Summer of Arcadeâ€™ game for this week. Itâ€™s a third-person shooter from 5th Cell. Yes, thatâ€™s the same 5th Cell who created the Scribblenauts games. This shooter has a couple of twists â€“ it’s a 3 versus 3 affair, and you donâ€™t have full control of the characters. You tell them which battlefield object to use as cover, then the character moves to that. It could be a bit too different for it’s own good, but we approval of the strategic elements. When it launched on Wednesday it was quickly taken down due to sever errors. Hopefully it’ll be back on the dashboard by the time you read this. Price? 1,200 MSP.

The Left 4 Dead 2 add-on Cold Stream had problems at launch on Friday too but is finally available now for 560 MSP. As a bonus it also contains four campaigns from the original game.

Over on 3DS thereâ€™s SpeedX 3D, which started out as a mobile game. Think along the lines of a mixture of Tron and Trailerblazer. Thereâ€™s a trailer here:
http://www.youtube.com/watch?v=a_YnCEyP-nQ&feature=player_embedded.

The DSiWare offerings meanwhile are 90’s Pool and 101 Pinball World, for Â£4.50 each, while the 1996 RPG The Sword of Hope 2 is launching on 3DS Virtual Console.

American PS3 and PS Vita owners are currently enjoying 2D musical platformer Sound Shapes, but we in the UK have to wait until next week. Itâ€™ll be worth the wait though â€“ reviews have been full of praise. One journalist on Twitter has even described it as being the PS Vita’s killer app.