Konami has made the news this week and for reasons a lot more exciting than announcing that Metal Gear Solid 4 will belatedly be receiving trophy support. 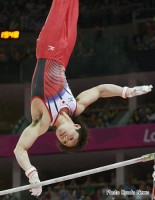 Congratulations are in order, first. Three of Konamiâ€™s employees â€“ from their Konami Sports & Life subsidiary â€“ competed at the London 2012 Olympics, one of which managed to win a gold medal in menâ€™s gymnastics. You can watch Kohei Uchimuraâ€™s winning performance here on YouTube.

Commiserations now go out to a contestant on the US version of Who Wants to be a Millionaire, who lost out on $7,000 by incorrectly answering about the famous â€˜Konami Codeâ€™. Thereâ€™s a video of this on YouTube, too.

Currently the video for the WWTBAM question blunder has more views than Kohei Uchimuraâ€™s superlative gymnastic skills. Clearly more people like watching videos of people failing in life, rather than succeeding.