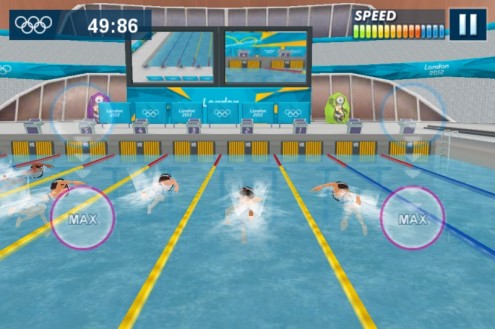 The freemium model is a bit of a curious fit for an official Olympics game. It doesn’t quite give the right message, does it? If you want to succeed, you need to build on your natural talent through plenty of good solid practice. Or just bung us a few pennies and we’ll sort you out. Hmm.

But actually, the freemium elements aren’t particularly problematic. Stamina – which is required to play and is depleted by doing so – recharges with levelling up, and early on that’s pretty frequent. Stars aren’t handed out quite so liberally, but you get a decent number for free – and even more in the premium version – so it’s not a problem to unlock most of the events on offer.

There’s plenty of standard issue button bashing – and variants thereof – and that remains a surprisingly moreish activity – for a bit, anyway. Only 9.90 seconds in the 100m? Pah! I can do better than that! That is, until you realise that you can’t do any better, and enough is enough.

A word of warning though: button bashing on a slippery iPhone is a risky business. Maybe it’s my technique, but it’s all to easy to get carried away and see the shiny slab flap all over the shop. I wouldn’t want to try it on public transport.

The tilt controls are less of a risk, but they’re bloody awful. Sluggish isn’t the word. Actually, it’s exactly the word. Switch them off, though, and the virtual controls are generally fine. Other than canoe slalom, which is pretty poor either way.

But it’s mainly fine. There are a few rough edges, but it looks moderately nice, and it’s quite diverting. And free. At least, I managed to keep it that way: by the point that it started to look like IAPs might soon become necessary, I’d got plenty of tapping out of it.

Usually, I’d feel a bit bad for not paying for something that’s given me some entertainment. But in the case of the Olympic Games, with their invasive corporate sponsors, I’m quite happy to take what I can get. Plus I’ve paid more than enough for my athletics tickets…