You canâ€™t deny that Deep Silver hasnâ€™t picked a good week to release Risen 2: Dark Waters. Thereâ€™s absolutely nothing else out at retail.

The PC version of Risen 2 was released to a sea of 6s and 7s back in May. There are no reviews of the Xbox 360 and PlayStation 3 version at the time of typing, but we canâ€™t imagine it having come on leaps and bounds since then. 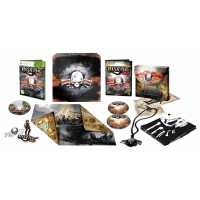 Those who have pre-ordered it from certain retailers will receive a Treasure Isle DLC mission which contains a legendary item and also helps to wrap up the plot from the first game. A special edition is also available, containing a soundtrack CD, poster, pirate flag, amulet, art-cards and a set of stickers.

We were sent the first Risen game to review, and although it was ugly when compared to the PC original and the combat wasnâ€™t up to much, it still had a strong sense of exploration and discovery.

Over in the world of downloads, the third game in Microsoftâ€™s Summer of Arcade promotion has been released. Deadlight is that game. Previews looks quite promising, but reviewers have found it to be rather on the short side – clocking in at just two hours long – and subsequently quite expensive for what it is. Hopefully next week’s Hybrid will fare better.

Next week: Agarest: Generations Of War 2 (PS3), Hybrid (XBLA) and a belated PC version of The Amazing Spider-Man.