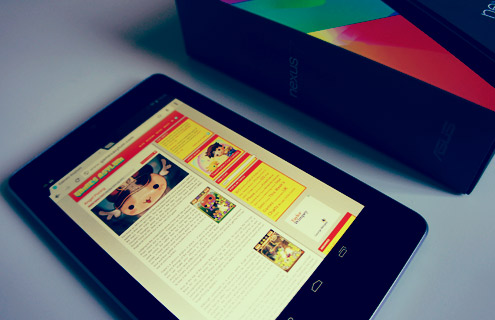 Last month Google unveiled their entry into the tablet market, with the Google Nexus 7, the budget-priced 7â€ Android tablet that aims to surpass the Kindle Fire and potentially Appleâ€™s iPad. The Nexus 7 finally started shipping last week and I was lucky enough to take delivery of one on Wednesday. I opted for the 16GB model, which is selling for just Â£199, whilst thereâ€™s also a model with 8GB storage for Â£159 – both costing less than half the price of an iPad, with the 8GB model costing even less than a PS Vita.

The modest price is clearly one of the main attractions of the Nexus 7, but even more remarkable is the high quality of the device, especially considering the price. The internal hardware is up there with the best devices on the market, with the Nexus 7 packing a quad-core Nvidia Tegra 3 CPU (for reference, basically double the processing power of an iPad 3) and a 12-core (yes, a dozen) GPU pushing a lovely looking, pixel-packed 1280×800 resolution 7â€ screen. As a gaming device, this actually makes the Nexus 7 pixel-for-pixel more powerful than the iPad 3, which has to push a 2048×1536 resolution screen with a similar graphics chipset. Sure, 1280×800 isnâ€™t quite â€œretina-levelâ€, but itâ€™s still 216 pixels per inch, which is almost the same as the 220 pixels per inch that Apple call â€œretina-levelâ€ on their Retina MacBook Pro. (To be fair, based on Appleâ€™s guidelines, absolutely any screen becomes â€œretinaâ€ once youâ€™re really far away from it.)

A few corners were cut to reach the sub-Â£200 price tag, namely the lack of a rear camera and SD card slot. The latter is a bit of a shame, as expandable storage has always been one of the nice perks of Android hardware, but life with a mere 16GB is manageable and I suppose we mustn’t grumble. Connectivity is limited to WiFi only, with no 3G option, if that’s something that matters to you.

But enough about the hardware, you can just look at this spec sheet if youâ€™re really interested…

There are a few things which really set the Nexus 7 apart for me, and make it more than worthy of its price tag. Firstly, the fluidity of the user interface. Google have spent a lot of time working on the response time of the Android UI, working on what they call â€œProject Butterâ€ for the latest version of Android (codenamed Jelly Bean). As a UI designer myself, I was really impressed to see the lengths Googleâ€™s Android team went to in an effort to make everything so responsive. In addition to including a special low-power CPU (in addition to the main quad-core CPU) to make wake-up times instant, they used RED cameras to measure the UI response time down to the millisecond, to ensure the whole interface felt silky smooth. Also it doesnâ€™t hurt that now everythingâ€™s hardware accelerated on the GPU. The end result is a UI that feels incredibly responsive, moving quickly and precisely, giving the impression that the Nexus 7 is doing everything absolutely effortlessly. This is the first time Iâ€™ve felt like Android has actually surpassed Appleâ€™s iOS in terms of interface and that subjective software quality that just makes the whole package feel so solid.

So Android and the Nexus 7 work together harmoniously, but what about gaming? Well, thatâ€™s the other reason I think the Nexus 7 makes a formiddable little gaming device. It just so happens, that ergonomically seven inches work surprisingly well. If youâ€™ve experienced trying to play traditional games on an iPad, holding it in your hands like a giant controller, the experience is… a little like holding a big plate. Itâ€™s too big, a little difficult to hold, and it doesnâ€™t take long before the weight becomes a little too much for your limp wrists. The Nexus 7 however is about half the size of an iPad (though more than half the screen size) and half the weight. Itâ€™s comparable to a Kindle – so you can easily hold it one handed to read a book, without it ever feeling too heavy. Like the Kindle it also has a nice rubberised backside, which feels nice and always provides a great grip.

What does all that have to do with gaming? Well, when holding the Nexus 7 in landscape mode, itâ€™s almost the same width as a PS Vita. Obviously it doesnâ€™t have the analogue sticks or buttons, and virtual buttons are never quite perfect, but holding a Nexus 7 isnâ€™t unlike holding a PS Vita – or as Google themselves said, it’s “like holding a Sega Game Gear” – which makes the Nexus 7 a surprisingly good little gaming device. Being Android, the whole operating system can be as customisable as you want it, so if you really feel the need to tinker with things, it is actually possible to connect a regular control pad to the Nexus 7 using Bluetooth or USB. You can run emulators on it too, so itâ€™s quite an impressive little gaming device. 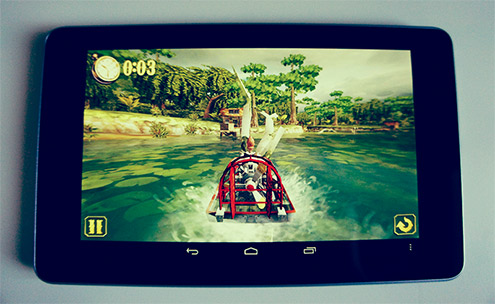 As good as the device is though, it needs great games to be a great games system. Thatâ€™s where things get a little muddy – and this is true for all Android devices. Whilst Android is a wonderfully open system, free for practically anyone to publish on, itâ€™s still lagging behind Appleâ€™s App Store for great games. Many of the big hits are available on both platforms, but due to rampant piracy and a general reluctance for many Android users to pay for games, developers still favour iOS. Thatâ€™s slowly changing, but it still remains an issue.

That’s not to say there aren’t any good games to play on Android. Most of the “obvious” mobile games are available on Google Play, such as Angry Birds, Cut the Rope and Where’s my Water?, whilst there are quite a few console-quality games too, such as Shadowgun, Minecraft, Grand Theft Auto III and Football Manager 2012. Considering such games could easily retail for Â£20 or Â£30 as PS Vita games, downloading them from Google Play for a pound or two is a bit of a steal.

As a tablet for web browsing and email, the Nexus 7 is arguably the best on the market, if you’re fine without a 3G connection. The latest version of Android feels incredibly slick and frankly rather good, and a tablet with an Nvidia Tegra 3 chipset for under Â£200 would have been unthinkable just six months ago. Solely as a gaming device, the Nexus 7 shouldn’t be your first port of call, but it certainly doesn’t disappoint in that department. In fact if you like the idea of getting your hands dirty and installing emulators, it actually makes a brilliant retro emulation machine. As a package, it’s just a remarkably nice and likeable little thing.