The Skylanders come in all sorts of shapes and sizes, but most are easily identifiable. Thanks to Spyroâ€™s involvement there are a fair few dragons, plus a few knights, elves, skeletons and dinosaurs thrown in for good measure.

Then you have these chaps below, who are somewhat harder to describe, with faces only a mother could love. Presenting the six strangest Skylanders:

Resembling a coconut with ears, Trigger happy carries two golden guns and throws pots of gold at enemies. Why is he so rich? Nobody knows. His fortune would at least explain his enlarged pupils, slack tongue and incredibly focused nature.

Most likely to: repeatedly be arrested for possession of an offensive weapon.
Least likely to: open a quaint teashop in Cornwall. 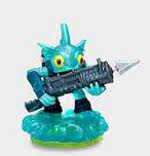 The race of creatures that Gill Grunt belongs to are clearly quite an advanced species, having evolved to the point where theyâ€™re able to walk on land and breathe air unassisted. Gill must be the JarJar Binks of his race, however, talking in the most primitive of manners and seemingly low on intelligence. Here’s proof of his stupidity: one of his weapon upgrades allows him to fire a jet of hot water. â€œPrepare for a mild scolding, bad guys!â€

Most likely to: mistake a shark for a dolphin.
Least likely to: eat a tuna sandwich; even in the world of the Skylanders, cannibalism is illegal. 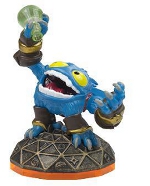 A new addition to the Skylanders family, fuzz-ball Pop Fizz gets his name not from being addicted to popping candy but for being an alchemist. His catchphrase is “The Motion of the Potion!” which suggests to us that heâ€™s hard at work making the ultimate laxative. Well, somebody has to invent these thingsâ€¦ 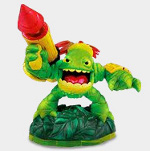 While we can comprehend that Zook is a plant-like being who fires missiles made out of thorns, we canâ€™t comprehend why such a life form would want to be in close proximity to fire and explosions. Perhaps he gets a thrill of out being in close danger, just like those adrenaline-junky rabbits you see eating grass next to a busy road.

Most likely to: unknowingly catch gangrene.
Least likely to: star in a 2D platformer sponsored by Chupa-Chups.

The mask. Why the mask? We want to know whatâ€™s underneath it. Does he have a caring and honest face which wouldnâ€™t scare even the smallest of bad guys? Are his features so deformed that even the mask is an improvement? One thing we do know about this mysterious being is that his catchphrase is “Boom Shock-A-Laka!” so obviously just like us, he spent most of the â€˜90s playing NBA Jam.

Weâ€™re told that this character is in fact a grub worm who after being dropped into a cauldron as an ingredient ended up eating the lot and becoming the critter he is now. All fine and well, but he must feel a bit down to be the only Skylander to resemble a battered and bruised testicle. A wrecked ball indeed.