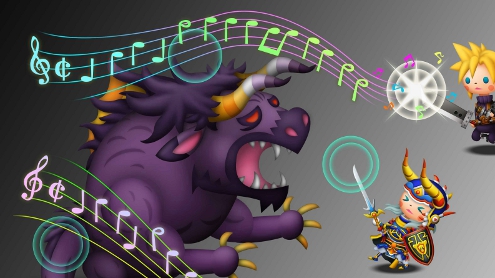 There was a time that whenever Square-Enix strayed away from RPGs the results would more often than not be disastrous. Thankfully the days of the embarrassingly bad beat â€™em up The Bouncer and shoddy racing sim Driving Emotion Type S are long behind us. The PSP-exclusive brawler Dissidia Final Fantasy proved that they didnâ€™t have to be a one-trick Chocobo, and like just like Dissidia this 3DS-exclusive is something of a treat for Final Fantasy fans starring lots of familiar faces.

On paper Theatrhythm sounds rather â€˜hardcoreâ€™ â€“ itâ€™s a rhythm game with RPG elements including experience points, changeable parties and boss battles. The reality is in fact the opposite. Itâ€™s a pleasingly simple affair, requiring nothing more than tapping, sliding and pressing down on the touch-screen in time with the â€˜triggersâ€™ that appear on the top screen. Rhythm action games have been becoming rather technical over the past few years, so to play one that just focuses on the basics of the genre is quite refreshing.

The ease of play can also be pinned on a few other things. Firstly, you can touch anywhere on the bottom screen, leaving you to focus on what’s appearing on the top screen. Secondly, the difficulty level is pretty even throughout. It doesnâ€™t matter if youâ€™re playing through the events of the original Famicom Final Fantasy or 2009â€™s Final Fantasy XII â€“ in either case youâ€™re given a good five second heads up of what’s coming next. 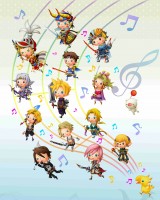 Thankfully for battle hardened gamers, Theatrhytm isnâ€™t a total cakewalk. Completing sections faultlessly bestows elusive SSS rankings and after youâ€™ve knocked up a couple of hours of play the Chaos Shrine opens up. Here the difficulty curve skyrockets â€“ the triggers that you come across often require you to swipe in many different directions in quick succession. There are plenty of unlockables to find too, no matter what mode youâ€™re playing, including trading cards (known as CollectaCards) and rare yellow crystal shards.

Presentation is lavish throughout. The characters have been given a unique art-style, with bulbous heads, spindly limbs and rather dead looking eyes. When playing through the Event Music Stages, FMV clips play in the background, which once beaten are added to a museum so you can watch them in full without distraction. These videos arenâ€™t in 3D, however.

The assortment of music is vast, ranging from unaltered 8-bit originals to Final Fantasy Xâ€™s rousting vocal scores. You may get a few odd looks if playing through the Final Fantasy I and II stages in public with the sound turned up, due to their plinky-plonky nature, but the later musical scores are so arresting that youâ€™d be likely to get somebody looking over your shoulder on the sly. There are extra songs to download too, albeit at an additional cost.

So while Theatrhytm may not be overly technical, itâ€™s still a joy to play. Final Fantasy diehards will undoubtedly get more out of it than casual fans â€“ itâ€™s not hard to imagine fans feeling overcome with nostalgia in places â€“ but nobody could deny that itâ€™s not lovingly made.