Tiny Wings was Apple’s 2011 game of the year in Europe, and deservedly so: it’s lovely. A delightful teaser trailer for Tiny Wings 2 surfaced last week, with a release date of 12th July 2012.

Collective conclusions were leapt to, but we should have been looking more closely at developer Andreas Illiger’s Twitter stream:

With that in mind, it’s no surprise that Tiny Wings 2 actually turned out to be Tiny Wings 2.0, an extensive update to the existing app. Illiger explained his decision to Touch Arcade:

“I decided to give it away for free as a big ‘thank you’ to all my fans for changing my life. That’s really important for me and the reason why I make this little stupid marketing trick of confusing my fans before the release.”

I wouldn’t call it a “little stupid marketing trick”; I’d say it was very clever PR. Also very generous, but clever nonetheless, because it virtually guaranteed that there would be no negative coverage, and a lot of positive coverage.

Had Tiny Wings 2 been released as a stand alone app, there would have been initial interest, but then inevitable complaints of cashing in – with comparisons to Angry Birds – and slightly underwhelming reviews when the game turned out to be less than a complete reinvention.

Had it been announced as a Tiny Wings 2.0 update in the first place, there would have been nothing like the same interest in it, and coverage of it.

But this way, Illiger secured coverage in anticipation of a full-blown sequel, then follow-up good news stories that what everyone was expecting to pay for, is in fact free! That it’s ‘only’ an update is, by this stage, irrelevant.

Granted, Illiger isn’t getting a penny from everyone going out and enthusiastically downloading the 2.0 update. But what’s that creeping up the App Store paid chart? At #22 yesterday and #12 at the time of writing – oh look, it’s Tiny Wings. Plus there’s the new iPad version to promote, which is earning him several pennies. 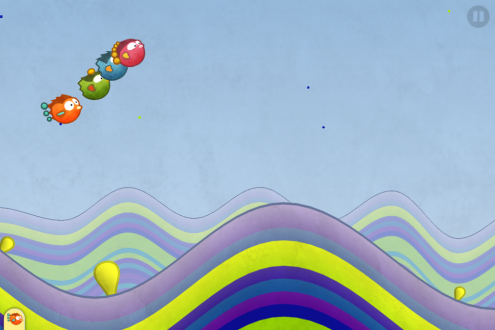 And what of the update? The original game has now been designated Chapter 1: Day Trip, and wisely otherwise remains as was: touch the screen to plummet, release it to fly, and get as far as you can before the sun goes down.

The new mode is Chapter 2: Flight School, which is actually very similar to Chillingo’s Woody Woodpecker game, in that it’s basically Tiny Wings but in a race format.

It’s set on fixed levels rather than the original’s procedurally-generated endless style, and you’re rewarded with bigger fish for beating more of your three competitors – which is a three-star system slightly disguised. It makes a nice change: memory comes into it to beat the faster birds, and the later levels require a good bit of skill to avoid the increasingly awkward lumps and bumps in the landscape.

So in the unlikely event that you’ve not already got Tiny Wings, there’s no excuse. 69p? Madness.