A couple of weeks ago, beardy indie development sorts the Pickford Bros launched their self-explanatory Games We Like page, and called for other indies to do the same. A number have done so now, and always on the look out for interesting bits to play, I thought I’d act on some of those recommendations. 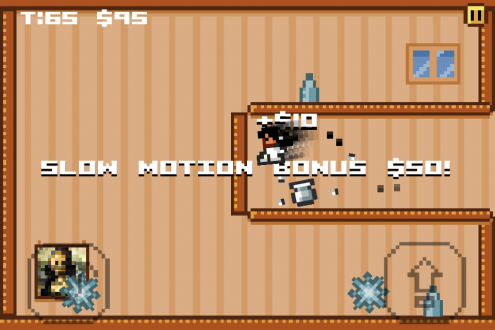 Infinite State Games has a good selection of recommendations, this being my pick of the bunch. As the name suggests, you have to run around causing as much damage as possible.

The rooms are randomly generated, and not always terribly cleverly so – it’s not uncommon to enter a room with no choice but to go straight back out the way you came, or to die virtually immediately and almost unavoidably. But somehow, that just adds to the ramshackle charm of the thing.

A recommendation from Kwalee – and do give our Adam a little wave if you click on the link. Actually, they recommended Zen Bound, but the sequel contains everything from the original, just super prettified. And it is very pretty.

The idea is to wrap rope around beautifully detailed wooden sculptures, using nails in the wood to pivot around. Little paint bombs gently pop as you do so, the aim being to cover as much of the sculpture as possible with paint.

It’s a touch disconcertingly vague at first, with little or no instruction. But spinning the sculpture is completely intuitive and wonderfully tactile, and just giving it a go and seeing what happens is perfectly in keeping with the relaxed tone of the game.

Another of Infinite State Gamesâ€™ choices. Other than the App Store description – “Clean up a swarm of bastards!” – it’s the control method that’s the attraction here: there are no virtual buttons to be found, and it’s initially a bit awkward to distinguish between the gestures required to move, charge your attack, and direct it.

But after a while it makes perfect sense, and out of the haze comes a rather enjoyable, hectic one-screen shooter – where you have to knock enemies off the screen, rather than kill them.

Don’t bother with the sequel, HungryMaster, though: it’s all about turning monsters into food and drink to deliver to hungry houses, and is generally a lot more like hard work.

One of the Pickfords’ choices. It’s a simple game of tapping to turn your rocket, to keep it within the rings of Uranus. The less said about which the better.

Unfortunately, I’ve been playing a lot of Gauge recently, which does the ‘tapping to keep with limits’ thing a bit more interestingly.

More attractive though is the mutliplayer mode, which requires a little 69p in app purchase. I do enjoy the absurd sight of people gathering around a tiny iPhone, each tapping their own little corner of the screen.