The Amiga was a magnificent bundle of circuits. Just when people thought they’d seen what the machine was capable of, something else bettering it would be released.

Some of the last commercial Amiga games – I kid you not – included Wipeout 2097 and Quake. Sure, they required a few extra pieces of hardware in order to be played but it was still a humble Amiga doing all the hard work.

A fine way for bedroom coders to share their Amiga creations was via public domain software. Floppy disks containing free to distribute software mostly came from mail order catalogues, such as those seen in the pages of Amiga magazines, or taped to the front of said publications. 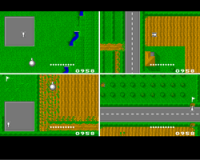 I was lucky â€“ my local indie store had a soft spot for the Amiga, with around half the shop dedicated to the format. They also had two or three arch-leaver files listing PD games. The idea was that youâ€™d write the catalogue number down of the game you wanted, then the guy behind the till would vanish upstairs for a few minutes before returning with a copy. They charged just Â£1 a game, with floppy disks available for 25p each. It may sound a little dodgy â€“ piracy was rife on the Amiga, after all â€“ but no laws were being broken.

Sometimes Iâ€™d pick a game on a whim, usually because the name piqued my interest. Other times the staff would offer a suggestion. When the outlay was so minimal, it wasnâ€™t a massive problem if the game turned out to be rubbish. 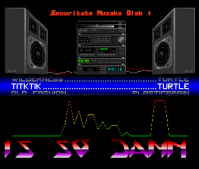 Public domain games tended to fall into one of three categories. Some were mere demos â€“ demonstrations of peopleâ€™s coding skills. â€˜Rave demosâ€™ were quite popular, containing rave music accompanied by trippy backgrounds. I also had a disk simply titled â€˜Sonic Demoâ€™ which was a mock-up of how somebody thought Sonic the Hedgehog would look if converted to the Amiga. It only contained the first level, and it wasnâ€™t playable, but it wasnâ€™t far from the real deal.

There were plenty of unofficial conversions of classic games too. Pixel perfect renditions of Pac-Man, Defender and more. One of the Amiga magazines gave away a game called Master Blaster, a brilliant clone of Bomberman that provided many nights of entertainment. 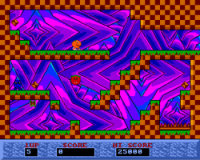 Some PD games were good enough to be full price games. The turn-based Scorched Tanks was incredibly popular, with many comparable elements to Worms. There was also Tanks ‘N’ Stuff, a top-down multi-player game where the aim was to find flags and return them to your base. If you destroyed another player they dropped their flags. You could also drive right into a playerâ€™s base â€“ providing they hadnâ€™t placed mines â€“ and steal their haul. Whoever had the most at the end of the round won. I also have fond memories of a single screen platformer known as Fruit Salad, which had trippy backdrops and music samples taken from 2Unlimited. Word. 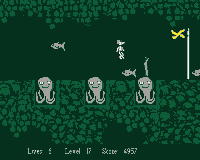 Indeed, a few games did take liberties with licenses. There were games based on The Smurfs, Mr. Men, Danger Mouse, Beavis and Butt-Head and more. The Smurfs game was a topâ€“down shooter in which you had to shoot the blue guys to bits. Beavis and Butt-Head meanwhile featured the theme music and dozens of speech samples. The game itself wasnâ€™t anything exciting â€“ it too was a top-down affair, only here you had to mow a lawn. Frogs could be run over, leaving blood-spattered tyre tracks in the grass.

A few games did push the boundaries of what was morally acceptable a bit. Wheelchair Olympics and Wheelchair Gladiators spring to mind here. There was also a joystick waggling game with naughty imagery which changed frame, like a flipbook, as you waggled the joystick. 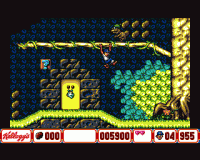 In hindsight, PD games did perhaps harm the Amiga. It was very hard at times to tell which games were legally fine to copy and distribute amongst friends and which ones weren’t. I can recall making copies of Tony & Friends in Kellogg’s Land â€“ a platformer starring various cereal mascots – thinking it was a promotional shareware title. It wasnâ€™t until a few years ago that I learned that it was in fact developed by Factor 5, who went on to develop Star Wars: Rogue Squadron II for GameCube and Lair for PlayStation 3.

Public domain games gave Amiga owners the chance to seek out hidden gems and add a new game to their collection for the cost of next to nothing. SNES and Mega Drive owners may have had Mario and Sonic, but this is something they were never able to boast about.