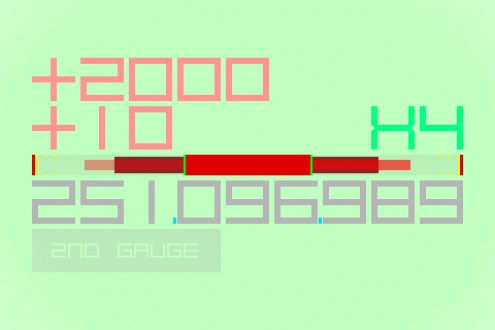 It takes a few goes to get Gauge. The titular bar is not unlike something you’d have seen in a golf game fifteen years ago, but it’s not a helpful comparison – trust me. So forget I said it. But once you do get it, and score slightly less pathetically, the game tells you: “Now you start to get it.” Indeed I do!

Touching the screen fills the gauge, and the idea is to keep it as high as you can – since that’s where the big points are to be had – without touching the outer or inner edges – for that is where death is to be had. Lives are earned periodically, and also act as a score multiplier.

You have to go near the inner edges to grab bonuses, which give you a second gauge, or a nice haul of points if you’ve already got both gauges in play. The second gauge is controlled by tapping on the other side of the screen, and moves at a different speed to the first. And that’s when you really need to start concentrating.

Explaining the mechanics misses the point though. What makes the game great is that it really, desperately wants you to fail while you’re playing. But it adores you afterwards if you’ve done well. It is a harsh lover.

To help you fail, the game has a big old bag of distraction techniques to dish out at you.

The background starts off crisp and clean, but pulsates, flashes and changes to unhelpfully similar colours to the gauge. The gauge itself moves and jerks around the screen, becomes thinner or dashed. The game speaks to you in text above and below the gauge, which ranges over amusing, annoyed and downright tricksy. The music isn’t helpful either. Also lolcats.

It really throws everything it can at you, and watching it all build up in increasingly ridiculous ways is simultaneously maddening and brilliant, surprising and hilarious. If you like that sort of thing. Which I do.

It’s an incredibly pure game based around one idea, executed with skill and humour. What’s more, it’s free for the timed mode, and only 69p to unlock the endless and touch modes. Rude not to, frankly.