If anybody is saddened by the fact the ten games below were never released, then you probably need to take a good long look at yourself. Weâ€™re mildly confident that they’re the best of the worst. 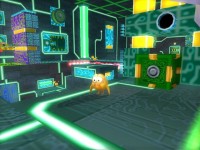 After the undeserved success of the two Crazy Frog Racing games the publisher started sniffing around for something similar to release. Seriously, who would have been stupid enough to buy both Crazy Frog games?

Jamster All-Stars â€“ which would have been known as Jamba All-Stars outside of Europe â€“ was set to include a handful of then-popular mobile phone ringtone characters including that yellow chicken which weâ€™re glad weâ€™ve forgotten the name of. Although the screenshots suggested that it wasnâ€™t going to be too bad visually, we can pretty much bank on the fact that it would have been full of annoying speech-samples.

Long before Beenox became Activisionâ€™s Spider-Man studio, they created this third-person platformer for Majesco. Apparently Microsoft wouldnâ€™t even allow it to be released due to how bad it was. We canâ€™t say weâ€™re surprised â€“ it looks like a fuzzy N64 game, starring the most generic main character you could possibly imagine. He reminds us of Juno from Jet Force Gemini before Rare gave him a makeover.

Reports suggest that Beenox gave it a little more development time and improved the visuals but it was still denied release. That terrible name canâ€™t have helped their cause either.

It was a misconception in the â€˜90s that girls wanted to play games such as Barbie Super Model instead of the likes of Sonic and Mario. Thankfully for the female gaming population of 1993, mini-game collection Barbie Super Model was never released despite being finished. It was so close to being released that scans of the proposed box-art have surfaced online.

Publisher Hi-Tech Entertainment had another two Game Gear games planned â€“ movie tie-ins of Beethoven and the often forgotten dinosaur romp Weâ€™re Back – which also ended up on the virtual scrapheap.

Quite a few cartoons were tipped to take over from the Teenage Mutant Ninja Turtles in the popularity stakes. Bucky â€˜o Hare was one cartoon; Stone Protectors was another. It was based around an already established toy-line â€“ Trolls. Only these werenâ€™t Trolls with jazzy hair and changeable outfits though. They were trolls for boys, with weapons and cringe-worthy names such as Chester the Wrestler.

The cartoon wasnâ€™t a hit â€“ only 13 episodes were made, and only eight of those were released on VHS. The SNES version of the game was released in the US via Kemco but Eurocom’s Mega Drive version â€“ which Vic Tokai were going to published â€“ was ditched although finished.

The SNES version wasnâ€™t a terrible game, but did the Mega Drive really need another scrolling beat â€™em up when it already had Streets of Rage 2? No.

If there was one thing the Dreamcast didnâ€™t need, it was sloppy ports of PSone games such as Woody Woodpecker Racing. Konami were quite a bad offender of this, releasing some of the systemâ€™s worst games such as The Grinch and Nightmare Creatures 2.

The screenshots of Woody Woodpecker Racing had all the hallmarks of a shoddy conversion â€“ the textures had been given a quick smooth over and that was about it. The PSone version was critically mauled, making this one of the few Dreamcast games weâ€™re glad that we never got to play. 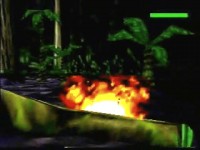 Oh, Titus. They were a company that didnâ€™t give a single crap if their games were bad. Jungle Bots sounds like a catastrophe in the making right from the start. Are you ready? It was a toy license being turned into a first person shooter, which was being made by Conceptual Realities who had only worked on amusement park rides in the past.

To make matters worse Titus wanted it to fit on the smallest N64 cartridge available (32MB) to save on costs. We would like to say that Titus went onto bigger and better things, but they really didnâ€™t.

Ask anybody what they thought of 3DOâ€™s Army Men series and youâ€™re likely to be treated to a long list of naughty words. To make matters worse, at one stage 3DO were releasing new Army Men games every couple of months.

Army Brats â€“ also known as Army Arcade Blast â€“ was going to be a departure for the series, featuring an even more cartoon-like vibe. ‘Super deformed’ Army Men, if you will. It was in development for both PSone and Game Boy Color back in 2001. Take a look at the intro and tell us you too aren’t glad it was canned.

It took EA a while to realise what type of games people wanted to play on the Nintendo DS. Burnout Legends and Marvel: Rise of the Imperfects didnâ€™t do the system any favours at all, but it wasnâ€™t long until they upped their game and put out the more pleasing likes of MySims and Henry Hatsworth.

So what did they plan for release alongside the 3DS? A gardening game that looked casual to the extreme. We wouldnâ€™t be surprised if this one started out as a tech demo (the screenshots did look quite fancy) only for the studio to realise that it would be impossible to make a decent gardening game. Weâ€™ll stick to Mario Kart 7, thanks.

Momma Can I Mow the Lawn? â€“ Gizmondo

Another gardening game? Good Lord. Maybe one day weâ€™ll write a full article on the fascinating story behind the Gizmondo, a handheld seemingly released only to fleece investors out of their money. Until then though, youâ€™ll have to make do with reading about Momma Can I Mow the Lawn?

This was originally going to be a multi-format game but after the development studio Warthog was snapped up to solely create Gizmondo games it became a Gizmondo exclusive. Although the name raises a grin, the idea behind it sounds daft – and not pleasingly daft. A lawn mowing sim in which you have to avoid UFOs and other enemies really doesnâ€™t sounds like the system seller the Gizmondo badly needed, does it?

We could just tell you that this 16-bit platformer was going to star Bill Clintonâ€™s cat – of all living things – and be done with it, but that wouldnâ€™t be much of a way to end this article.

Some people believe that it was canned because the publisher went bust, while others think it was denied a release due to its political overtones. Former Republican leaders such as Richard Nixon and George Bush were going to appear as bosses, would you believe. Development was finished and adverts appeared in magazines. Both of these things suggest it was canned due to fear of controversy rather than the publisherâ€™s demise.

Either way, 1993 also gave us Bubsy the Bobcat. That already provided all the feline frolics anybody would ever need.