By now, it’s no secret what Microsoft, Sony and Nintendo wanted to say at E3. In some cases it was never a secret, even if it was supposed to be.

But what about how they said it? What can we glean from the the words they used?

So be it. Let’s have a look at which words cropped up most. That’s right: let’s word cloud. 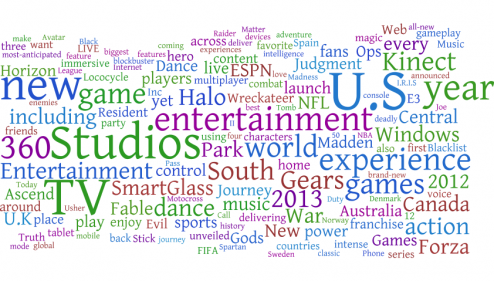 Okay, Studios isn’t really fair, since so many of their games are by Microsoft Studios. And lots of those games are right up there: Halo and Gears and so on.

But with the announcement of SmartGlass – which Microsoft are definitely keen to stress is new – there’s an absolute shed load of entertainment. An awful lot of which is exclusive to the U.S. 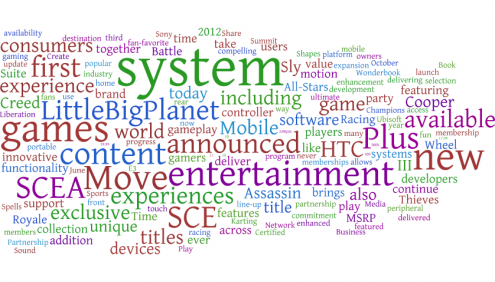 Sony are evidently incapable of mentioning any one of their formats without suffixing it with system – so that’s why that’s huge.

Plenty of games there, but like Microsoft there’s almost as much entertainment and, in Sony’s case, content. But it’s obvious which property is key to Sony at the moment: LittleBigPlanet. It’s ruddy everywhere. 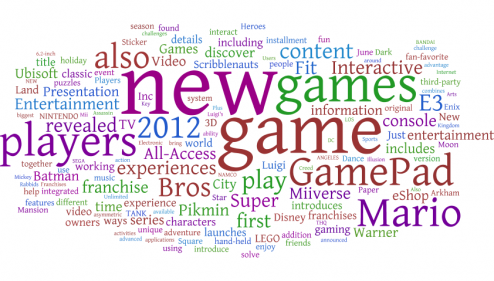 By contrast, Nintendo clearly consider themselves to be in the game making business – increasingly unlike Microsoft and Sony. Not much entertainment here, then, but a lot of Mario.

And with the new Wii U to promote, there’s quite a lot about the GamePad, and why they think it’s kind of a big deal.

It’s not only about games, it’s also about players. Which is probably how you’d expect Nintendo to differentiate themselves – from Microsoft, who make no noticeable mention of their public; and from Sony, who prefer consumers.