Youâ€™d think publishers would be too busy showing off new software at E3 to release titles people can go out and buy right now. This isnâ€™t the case, however â€“ there are a few new games out this week.

Game of Thrones is a hard one to recommend to anybody apart from fans of the show, especially seeing as this year has already given us The Witcher 2 and Dragonâ€™s Dogma. With a 6/10 review from Eurogamer though it certainly could have turned out a lot worse. â€œGame of Thrones reminds me of a less polished Alpha Protocol – another weird, buggy RPG that overcomes its flaws to some degree with fascinating narrative implementation and a world that actually seems to respond to your actions,â€ they said.

Currently the Metacritic score stands at 53%. We wouldn’t be surprised if this one dropped in price incredibly quickly. 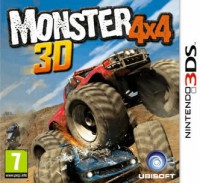 Another new RPG out is Blazing Souls: Accelate for PSP. Yes, the original PSP. It’s being released at a stupidly cheap price too – Â£9.99 on HMV.

From role playing to racing. The first Wii game we ever reviewed was not Red Steel or Zelda: Twilight Princess, but rather Ubisoftâ€™s Monster 4×4 World Circuit. Itâ€™s a game we picked up at launch and after just four or five hours we felt that we had seen everything it had to offer. This week Ubisoft are releasing Monster 4×4 3D, at a budget price, no less. We canâ€™t imagine it being any worse than Asphalt 3D.

Ubisoft are also releasing Rayman Origins 3D at a slightly cheaper price. We assume this is because the console versions can be found for around Â£15. The demo provoked some mixed reactions â€“ there were frame-rate issues and the controls felt a little stodgy. The only review at the time of typing is from Nintendo Power â€“ the official US Nintendo magazine â€“ who gave it 85%. We suggest waiting for a few more to surface.

Ratchet & Clank HD Trilogy for PlayStation 3 may or may not be out too â€“ Amazon says 8th June while Play says 28th June. Play seem to be a little off with their release dates at the moment, so weâ€™ll go with Amazonâ€™s date. It was originally due in May, we believe. If youâ€™ve never played Ratchet & Clank, Ratchet & Clank 2: Locked & Loaded and Ratchet & Clank 3 before then itâ€™s worth a purchase. Itâ€™s not like platformers are plentiful these days.