Nintendoâ€™s conference left fans a little perplexed. No less than 23 games were on show, which is a figure none too shabby, but most had already been announced while the rest felt distinctly casual.

At least things got off on the right foot with a demonstration of Pikmin 3 on Wii U. The visuals are a clear step up from the humble Wii with environments both detailed and smooth. A new Pikmin type was also shown â€“ rock Pikmin â€“ who are able to smash glass blockades and large crystals. The trailer also has a quick glimpse of flying Pikmin. Keep an eye out for them right at the end:

A triple helping of Mario titles were shown including New Super Mario Bros. U and New Super Mario Bros. 2 for 3DS. During the demonstration for Wii U, Reggie confirmed that two Wii U GamePads can be used on a console at a time. A second player is able to drop support items in for player one which can be used to assist during the new speed-run elements. New Super Mario Bros. 2 on the other hand has a focus on coin collecting â€“ the shiny things are everywhere. An American release date was confirmed â€“ 29th August. Paper Mario for 3DS finishes off the trio and now has the title of Paper Mario: Sticker Star, thanks to the ability to place stickers in the papery levels. In the short demo we saw a fan sticker being used to power a windmill.

Batman Arkham City: Armoured Edition was the first third-party Wii U title to be given an airing. Rather than simply slap a map onto the Wii U GamePad screen, the developers have clearly put a great deal of thought into how the additional screen can be used. A batarang can be guided through the air by tilting the device and the screen can also be used to scan areas when held up facing your TV. Warner Bros. has another Wii U game in the pipeline â€“ Scribblenauts Unlimited. The touch screen is used here to draw items that then appear in the game. A 3DS version is also planned.

After these short but pleasing demonstrations a showreel of other Wii U games gave us a look at the future. Darksiders II, Ninja Gaiden 3: Razor’s Edge, Tekken Tag Tournament 2, Aliens: Colonial Marines and Trine 2: The Directors Cut should need no introduction, and nor should the surprise Wii U version of Mass Effect 3. Namcoâ€™s Tank! Tank! Tank! is a previously unannounced game, however. We assume this is a conversion of their 2010 arcade game. Environments are destroyable and there are fantasy elements including hydra-like enemies.

Things then took a turn for the casual with footage of the self-explanatory Wii Fit U â€“ which can be used in conjunction with a pedometer â€“ and SiNG (working title) from DJ Hero developers FreeStyleGames. Thankfully Reggie wasnâ€™t forced to have a good old jive to show off Ubisoftâ€™s previously announced Just Dance 4.

Since we last saw LEGO City it has received a name alteration to LEGO City Undercover. It looks incredibly fun, resembling a LEGO GTA with the slightly warped sense of humour weâ€™ve come to expect from Travellerâ€™s Tales. The trailer ended with a LEGO man building a familiar looking green pipe, followed by a familiar sound-effect when leaping down it. A 3DS version is also in the works.

Just Dance 4 wasnâ€™t the only Ubisoft game to get an airing. The ZombiU trailer which was first shown during last nightâ€™s Ubisoft conference was played again in full. This is what Killer Freaks from Outer Space has become â€“ a zombie game set in London, complete with the ability to map your face into the game. It looks pretty decent, and much like Batman Arkham City the GamePad is being put to good use. We saw it being used as a torch and as a sniper rifle. Donâ€™t expect such innovations in Assassin’s Creed 3 â€“ it has been confirmed the touchscreen is simply being used as a map and to swap weapons. The Avengers: Battle for Earth is one we canâ€™t really comment on just yet as not much has been shown. Itâ€™s worth nothing though that it also stars Spider-Man and the X-Men. Rayman Legends was confirmed to have a five player mode and those Rabbids arenâ€™t too far away either, this time starring in Rabbids Land. Sports Connection and YourShape: Fitness Evolved 2013 should need no explanation. 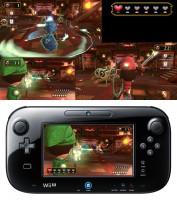 The conference ended with Nintendo Land â€“ a virtual theme park housing several mini-games based on various Nintendo franchises. Last yearâ€™s Catch Mii demo appears to have evolved into an Animal Crossing endeavor subtitled Sweet Days. Other mini-games confirmed were the single-player Donkey Kong’s Crash Course and Takamaru’s Ninja Castle along with the multi-player The Legend of Zelda: Battle Quest and Luigi’s Ghost Mansion which bares more than a slight resemblance to Pac-Man Vs.

Nintendo left us with a trailer of Nintendo Land, complete with fireworks and trumpets.

Judging by our Twitter feed many Nintendo fans felt disappointed that there was no other big name Nintendo franchises on show other than Mario. In fact, â€œno Zeldaâ€ even started trending on Twitter just minutes after the conference ended. Is it too much to expect a new Zelda just eight months after Skyward Sword? Perhaps, but a showing of another big-name Nintendo franchise wouldnâ€™t have gone amiss. There wasnâ€™t even the slightest hint of Pokemon.

After disappointment came confusion â€“ just moments after the conference ended word broke that Spike TV were announcing a new Platinum Games Wii U title currently known as P-100. It looks like a mixture of Viewtiful Joe and Pikmin, giving you the chance to control an army of tiny superheroes able to morph into giant hands, swords, aircraft and more. Spike TV had bagged the exclusive but quite why Nintendo didnâ€™t fight to get this trailer is a mystery. As you can see below, it already has all the hallmarks of a classic:

Moreover, Nintendoâ€™s press site contains footage of a new Wario Ware title â€“ Game & Wario â€“ which was also not shown. Why choose to demonstrate Just Dance 4 over this? E3 conferences are for the Nintendo hardcore; not the casual market.

While the conference did help to put a lot of faith into the Wii U hardware – Nintendoâ€™s games look even more charming in HD – weâ€™d be lying if we didnâ€™t say we expected a few more surprises and big name titles.