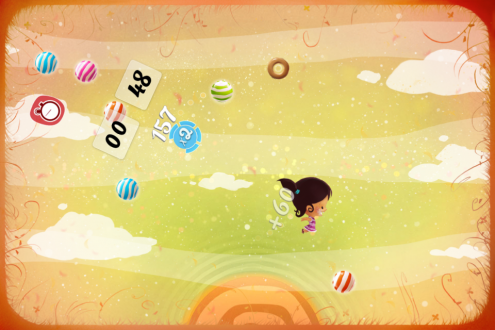 How do you choose a game from the baffling variety on offer on the App Store? When it’s only 69p at stake, the name is as good a reason as any to splash the pennies. Let’s Eat Sweets! – that’s Temporal Games’ exclamation mark, but I like it – definitely falls into the ‘good name, what the hell’ category.

After all, who can resist sweets? I know I can’t, and that’s why I run. The little girl in Let’s Eat Sweets! also combines running and sweets, but the former in order to obtain the latter, rather than in mitigation for it.

Not only can she run along any side of the screen, but she can also fall from any side to any other, in a slightly undefined floaty way. The tilt controls are good though, and with a bit of practise you can glide around the screen in wide arcs. It’s just not abundantly clear why you can.

But the point of doing so is, naturally, to eat sweets. Equally important are the bonuses – extra time, speed-ups – and avoiding the opposing anti-bonuses. One bonus turns all the sweets on the screen into chocolate-covered sweets, because chocolate is best; an anti-bonus turns them all into bagels, because bagels are not sweets.

It feels slightly unbalanced at the moment, in that the appearance of sweets and bonuses – and thus the chance of a good points haul – is a bit on the erratic side, and the floaty mid-air control isn’t exactly intuitive.

Yet the unusual physics are part of what makes it curiously likeable. That and the look of the game, which is cute while managing to remain distinctive – no mean feat on the App Store.