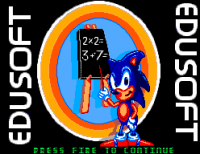 Frequent Games Asylum readers may be questioning why weâ€™ve picked a Sonic game twice in a row for our monthly retro gaming feature. Although itâ€™s true that we do have a soft spot for the â€˜hog, the story behind the unreleased Sonicâ€™s Edusoft (sometimes referred to as Sonic Edusoft) is a rather curious one that deserves to be told.

Itâ€™s a game that was very much made on a whim. After the release of the original Sonic the Hedgehog, Manchester-based Tiertex â€“ who handled the Master System versions of Paperboy and Gauntlet â€“ started work on an educational Sonic game aimed at 5 years olds and hoped that Sega would take a shine to it and snap it up.

Unfortunately for Tiertex, Sega simply werenâ€™t interested. If this wasnâ€™t the case then it would likely have been released between Sonic 1 and Sonic 2. 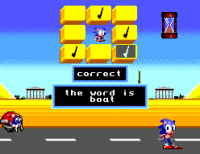 The playable ROM thatâ€™s available online suggests that development was pretty much finished. One of the programmers even said â€“ via a forum post on SMS Power – that it even got as far as being play-tested at a local school. We wonder if those children know how lucky they were to get to play an unreleased Sonic game?

The aforementioned programmer has always remained nameless but has been more than willing to share Sonic Edusoftâ€™s story. He originally added information about its existence to Wikipedia, only for it to be deemed a hoax. He then e-mailed a few screenshots to various Sonic fansites where, once again, fans refused to believe it was a real game. It wasnâ€™t until the ROM was dumped online that people realised that their proverbial legs werenâ€™t being pulled.

The game itself had some nice chunky visuals, and was based around a series of mini-games mostly involving maths and spelling. There were also three non-educational mini-games, presumably included to trick kids into wanting to play past the educational guff.

One of these mini-games was set in Green Hill Zone and simply involved avoiding objects that fell from the sky, while another saw Sonic jumping on a moving trampoline. A set of islands, viewed from an isometric perspective, acted as a hub, with extra areas that could be accessed once a certain number of the educational mini-games have been beaten. Sonic was also able to jump in a helicopter to get to different parts of the island. It was all very simple stuff, as youâ€™d expect from a game aimed at children. 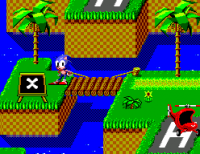 The fact that the NES had quite a few educational games similar to this would suggest that there was a market for such a thing. Our line of thought is that Sega put a lot of focus and attention into Sonic having a cool image, and perhaps thought that an educational game may have put a damper on that. Sega may have also been worried that it would divert attention away from Sonic 2, a game crucial in their strategy to winning the ’90s console war.

As the programmer said himself, itâ€™s hard to say if Sonicâ€™s Eudsoft should be classed as either an unofficial or unlicensed game. Tiertex started development on it without acquiring the Sonic license beforehand, but it doesnâ€™t seem right to file it next to the many fan-made Sonic games that are available, as Tiertex were a very well known developer at the time. Itâ€™s a tricky one to pigeonhole, thatâ€™s for sure.