In the 12 years that this website has been around, weâ€™ve never featured a book review. That changes today: two glorious Nintendo history books have recently plopped through our letterbox. 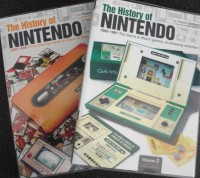 Well, to be fair it was more of a floor-shaking thud. These books are rather on the heavy side containing over 200 colour pages of rarely seen and highly collectable Nintendo items. There are items featured that apparently even Nintendo themselves no longer own.

Both of these books have been penned by Florent Gorges and Isao Yamazaki. The former is a French gamer who used to write for Japanese magazine Nintendo Dream as their European correspondent; the latter an owner of a Nintendo museum and also a former Nintendo Dream writer.

Neither book was originally written in English â€“ theyâ€™ve both been translated (from French, presumably) and as such there are more than a few typos, grammar mistakes and oddly placed commas. Thankfully these hiccups arenâ€™t enough to distract from the fact that both books are brilliant reads.

Volume one focuses on Nintendoâ€™s early days starting with Hanafuda playing cards and ending with their first foray into the world of videogames with the Color TV Game 6. There are some interesting titbits of information, like the fact that Nintendo still produces said cards, and how Nintendo back in the â€˜70s also produced a childâ€™s pram which was so badly designed that there were complaints of childrenâ€™s hands being caught in the mechanism.

We also enjoyed the story of how Nintendo handled the board game Twister – which they licensed from MB – in Japan. It flopped upon release as rubbing bodies against other people’s bodies simply isn’t Japanese etiquette, so they re-released it as a fitness aid and claimed it was a great way to keep fit and stay in shape. Sadly for Nintendo, the Japanese still didn’t buy it.

While volume one is incredibly varied, volume two focuses purely on the Game & Watch. Every LCD handheld is covered in great detail with some occasional trivia thrown in for good measure. There are even a few pages dedicated to the competition that the Game & Watch faced, and another few pages taking a look at the bootleg Game & Watch handhelds that surfaced. We found the section on the more recent Nintendo-licensed Mini-Classics quite interesting: Nintendo had nothing to do with these at all; Take-Two distributed most of them and some had buttons which werenâ€™t even used. The Harry Potter Mini-Classic was apparently the most popular of all.

Volume one was released late last year and can be found for a fair bit less than the Â£24.99 RRP. Volume two however was only released in March and consequently still retails for around the recommended price. If you enjoy these two then get ready to whip out your credit card â€“ another two volumes are planned. Volume three is going to focus on the NES/Famicom, while volume four the Game Boy and presumably all that it entails.