Proving that us videogamers really are just big kids, a lot of videogame related toys have sold for stunning amounts on eBay this month.

The most noteworthy of these is a golden vinyl Uncharted 3 toy said to be one of only 11 in the world. â€œFor ages 15 and upâ€ pointed out the seller but we donâ€™t think anybody under the age of 15 would have had the money to buy it â€“ it ended at Â£627.

A set of Battletoads figures from 1992 also fetched $71 (8 bids). We like the way that the seller included a photo of the reverse of the figures just so we could check out the toads’ tight buns.

A set of ceramic Donkey Kong figures from 1998 â€“ including Donkey Kong, Diddy Kong and the hateable Funky Kong â€“ didnâ€™t sell for quite as much as the above, but $23.50 (4 bids) seems pretty good seeing that donâ€™t appear to be that well made. Hard to believe they’re official merchandise, actually.

This Super Mario â€˜crash action police carâ€™ from the dire Mario Bros. Movie sold for a whole lot more â€“ Â£57.99 (7 bids). We wonder if Bob Hoskins has a few of these up in his loft?

Sticking with merchandise for a little longer, this Mass Effect lithograph â€“ one of only 75 sold â€“ didnâ€™t have a bad ending. It sold for $760.00 attracting only 6 bidders. An animation cel from the DiC Sonic cartoon didnâ€™t fetch anywhere near as much ending at just $10.45. We wouldnâ€™t advise clicking on this link to see it â€“ it was an image of Dr. Robotnik in the shower. Nude, obviously.

How about some other stuff that was never available in shops? Weâ€™re quite surprised how cheaply this GameCube development kit sold for. It went for only Â£275 even though the seller was confident that it has never been used. This DS download station demo pod cart didnâ€™t sell for a lot either, ending at only Â£22.99. Perhaps it would have sold for more if heâ€™d bothered to mention what was on it.

A couple of Jaguar games have gone for a small packet. Both of these were released very late in the Jaguarâ€™s life. So much so that it didnâ€™t even have a pulse at the time. Battlesphere blasted $710 (2 bids) out of somebodyâ€™s PayPal account while Gorf for the Jaguar CD sold for the same amount but attracted 17 bidders. â€œGame has been played once by me,â€ said the seller. That bad, eh?

Weâ€™ve also discovered this month that there are more N-Gage collectors out there than we previously though. A rare copy of Sega Rally, which was released only in Australia, went for $455.00 after 19 bids. Hardest game to find on the system, apparently. 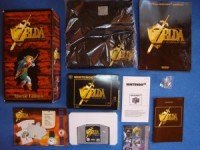 Thatâ€™s nothing compared to what this Korean 3DO beatâ€™em up sold for though. A colossal $1,725.00 (16 bids). Weâ€™re quite amused that the back of the box for The Eye of Typhoon features the same three screenshots.

Finishing off this monthâ€™s round-up are a couple of limited edition box sets. An incredibly rare factory sealed â€˜Treasure Box Editionâ€™ of Dead Island sold for Â£423 (27 bids). It was only available in Australia and came with a polo shirt, poster, comic book and some other stuff all enclosed in a wooden box. A Zelda: Ocarina of Time special edition managed to clear that figure though, ending at Â£789.99 (14 bids). Whatâ€™s in the box? Not much â€“ just the game, a badge and a T-shirt. The t-shirt was unworn though. Itâ€™s always nice to know that your expensive purchase isnâ€™t going to stink of BO, isnâ€™t it?