If this weekâ€™s UK chart was a tower then Nintendoâ€™s Pandoraâ€™s Tower would still be on the doorstep â€“ it makes its chart appearance at a very poor #38. This is a slight surprise â€“ even GAME are stocking this one and reviews have been pretty good. Maybe Wii owners are still busy with The Last Story? 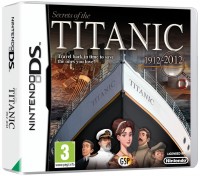 Itâ€™s good news for Kid Icarus though. Well, mildly good news â€“ the winged wonder has moved up two places. Going from #39 to #37 perhaps isnâ€™t something to be too excited about, however.

During its second week of release Rhythm Thief and The Emperorâ€™s Treasure has managed to make an appearance. Not in the top 40, sadly, but at #9 in the 3DS chart.

The only other new entry we can see is Secrets of the Titanic in the DS chart, which was presumably released to tie-in with the 100th anniversary of the legendary ship. Ban this sick filth, etc.