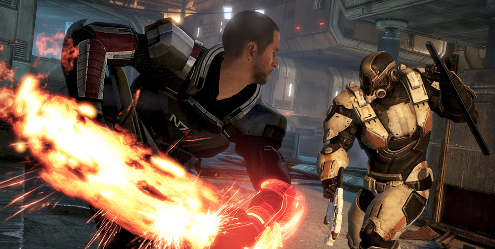 Hereâ€™s a hypothetical question for you. What would Mass Effect 3 be like if EA never purchased Bioware and Microsoft carried on the publishing duties? Microsoft could have done with another big game in their line-up for last Christmas so perhaps we would have seen it sooner. Something weâ€™re more certain on is that Microsoft wouldnâ€™t have stuck a load of cheeky promotional items in the game. Here, Commander Shepard can be kitted out in armour inspired by Dragon Age II, Kingdoms of Amalur and even Battlefield 3. That said, Microsoft did convince Lionhead to sneak some Halo-style armour into Fable II so maybe we would have seen Shepard running about in armour covered with Forza bumper-stickers while wearing a visor shaped like a Kinect. Hypothetical questions are fun.

No time is wasted getting you back into Shepardâ€™s boots. Mass Effect 3 kicks off with an action sequence set during a full-scale Reaper attack in London. There are few little pointers but itâ€™s assumed that youâ€™re familiar with Mass Effect’s controls and combat system. Newcomers shouldn’t feel anxious however â€“ full tutorials can be viewed on Shepardâ€™s computer back on the Normandy space-shuttle. By the end of this short section Shepardâ€™s intentions are clearly laid out â€“ return to Earth with enough firepower to wipe out the Reaper threat and save the galaxy.

The next thirty hours or so involve resolving conflict between alien races, taking down Reaper strongholds and influencing others to join Shepardâ€™s good cause. Early on Shepard also discovers blueprints for an ancient alien artefact thatâ€™ll greatly change the odds during war in humanityâ€™s favour. The Normandyâ€™s war room keeps track of all your war assets gained so far, complete with a progress bar that shows your military strength.

Proving that itâ€™s a small galaxy after all plenty of familiar faces pop up on Shepardâ€™s journey. Some join your squad of commandable team-mates; others step back and take minor roles. The seriesâ€™ renowned conversation arcs arenâ€™t quite as deep or complex as we anticipated but there are still plenty of memorable conversations to be had. Chats with Mordin the scientist in particular provide plenty of fan service.

Quite often Mass Effect 3 had us gawping at the screen like slack-jawed yokels. It looks phenomenal and the quality is consistent throughout. Given the gameâ€™s length thatâ€™s quite the accomplishment. Notable highlights include some of the vistas you can enjoy while visiting alien homeworlds and the general level of detail of the textures that coat the environments. Shepardâ€™s armour has visible dents and scratches and facial animation is equally excellent. Shepardâ€™s stubble has never looked more realistic.

It would appear though that in an attempt to make Mass Effect 3 a treat for the eyes Bioware missed out some fundamental RPG elements. Mission tracking is as basic as can be. As you stroll around the Citadel space-port you soon build up what can only be described as a shopping list of items that Shepard has been asked to look out for while out and about. Some of these items are found on foot during missions while others are acquired by scanning planets while travelling through space. Thereâ€™s no inventory to keep track of items that youâ€™ve found and a few of these quests are also time sensitive. If you donâ€™t complete them before tackling one of the priority missions â€“ which drive the story forward â€“ then they vanish off your mission log, meaning you miss out on XP. Youâ€™re also given fetch quests early in the game set on planets that donâ€™t appear until much later on. Far too much time was wasted aimlessly galaxy hopping until we realised.

More annoyingly, and quite a significant oversight, is that you canâ€™t compare stats on items for sale in the Citadelsâ€™ shops with those you already own. We once spent three missions worth of money on a new set of armour only to discover once back in the Normandyâ€™s armoury that it was less powerful than the suit we already owned. We wish we could say this was the only time this happened but it wasnâ€™t. On a more positive note, however, all it takes is one press of a button to bring up a map while on the Citadel which handily reveals the whereabouts of all the NPCs you can talk to and other items of interest.

The third-person shooting sections have been brought up to scratch too. Whereas the original Mass Effect felt like an RPG first and as shooter second, Mass Effect 3 can now hold its own with most of the big name shooters out there. Thereâ€™s a strong sense of urgency throughout and missions are a lot more set-piece heavy with most containing a twist or unique enemy encounter. Melee combat is a whole lot more satisfying and Shepard now has the ability to crouch behind walls and grab an enemy on the other side for a surprise attack. There are also large mechs that can be controlled by smashing the glass to expose the pilot and then hijacking. Enemy engineers are able to repair these mechs and can also set up gun turrets that do an awful lot of damage. Commanding your squad remains as intuitive as ever.

When it was announced that Mass Effect 3 was going have an online multi-player mode plenty of eyes were virtually rolled. The reality is that a surprising amount of effort has gone into it. Much like Gears of Warâ€™s horde mode, it sees you and three others battling waves of enemies. Thatâ€™s pretty much where the comparisons end though. There are mission objectives with a focus on teamwork â€“ such as watching a cohortâ€™s back while they hack into a system â€“ and there are only ten waves to play through, the last always being to survive an onslaught for two minutes while waiting for a dropship to land.

Bioware have incorporated a couple of neat little ideas as well. Rather than use your main character, a new character has to be created with dozens of alien races available. Once they reach experience level 20 they can be imported into the main game where they become a valuable war asset. The downside of this is that you lose that character for good. Credits are also earned by beating objectives and can be used to buy packs of random items and weapons. The more expensive the pack, the better chance you have of finding a rare weapon. Bioware have managed to capture the thrill of opening a pack of trading cards brilliantly.

Kinect functions are another new addition. Five minutes with the Kinect plugged in was all it took for us to discover that despite what the box says Mass Effect 3 really isnâ€™t better with Kinect. The speech recognition works fine but the voice controls are lazily implemented. Take exploring the Normandy as an example. You can yell â€œopenâ€ to activate the elevator but once inside instead of calling out the number of the floor you wish to travel to, you have to go back to using the joypad. Thankfully no achievements are linked to using the Kinect. Can you imagine how irked some people would have been if that had been the case?

So, Mass Effect 3 does have a few little niggles that stop it being from being perfect. None are game ruining thankfully – they’re just simple oversights. When games such as EAâ€™s own Syndicate start to lose their appeal even with a five hour play time, the fact that Mass Effect 3 manages to captivate for its entire 30 hour duration is a testament to Biowareâ€™s skills in both planning and pacing that very few other developers can match.