There’s a slight retro theme running through this week’s new releases – a new Silent Hill along with the anticipated HD collection, a Ridge Racer revamp, this year’s Tiger Woods and a load of Capcom classics on one handy disk. The emphasis is obviously on the word ‘slight’ there.

Silent Hill HD Collection angered fans the moment it was announced due to the original Silent Hill (which is on PSN) and Silent Hill 4 not being included. Reviews have also revealed that the developers have removed the fog which was not only used to mask graphical glitches but to help create an atmosphere too. Destructoidâ€™s 3/10 review is worth a read if youâ€™re considering it.

Silent Hill Downpour doesnâ€™t quite restore the series to a former glory either. gamesTM sums it up quite nicely in their 6/10 review: â€œSilent Hill: Downpour frustrates and irritates, it confuses and confounds. It doesn’t scare as much as it should and it doesn’t impress as much as we wanted. But there’s no denying its ability to keep you playing; to push through to the end.”

Faring better with review scores is Ridge Racer Unbounded. EDGE seemingly fell in love with it, awarding it a 9. â€œOne of the most subversive, sublime street-racing games ever made,â€ they said. Other reviews have been less positive such as CVGâ€™s 6.4 and gamesTMâ€™s 6. It certainly looks the part, you can’t argue that.

We swear the Tiger Woods games arrive earlier every year. Tiger Woods PGA Tour 13 still sounds like a decent package though with Kinect controls on offer for the first time. GamesRadar gave it a 7. Itâ€™s a good review â€“ very well thought out. And remember, if you buy it from Blockbuster you can play as Wayne Rooney.

If none of these take your fancy then Capcom Digital Collection might do. It contains eight of Capcomâ€™s Xbox Live Arcade games including Final Fight, Bionic Commando Rearmed 2 and Super Puzzle Fighter 2 Turbo HD Remix. Â£17.99 on Play doesnâ€™t sound a bad deal to us. 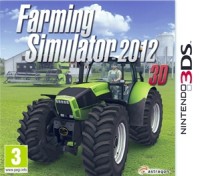 Or if tending to crops is more of your thing then thereâ€™s always Farming Simulator 3D. I think the blurb pretty much says it all: “The “Farming Simulator” and the Nintendo 3DS console are a great match: experience a high quality 3D-graphic which supports the 3D-effect of the console perfectly. You will be able to explore an open world, play with a day-night-cycle and chose a free-to-play mode on your way to become a successful farmer. The game addresses both kids and male adults and hence makes it a great expansion of the Nintendo 3DS family.â€

So female adults won’t be able to play it then? Righty ho.