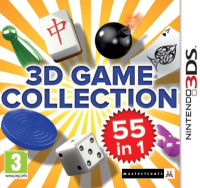 You may be thinking that this is a little bit of a pointless review. Although we wonâ€™t deny that it pretty much does what it says on the tin, to quote an advert that we hope people still remember, Nintendoâ€™s 42 All Time Classics on DS was a game that we got a surprising amount of mileage out of. As such 3D Game Collection would only need to be half as great to make it one of the better casual 3DS titles.

Although the front of the box claims that there are 55 games crammed onto the cart, thatâ€™s something of a lie. There are a few Sliding Puzzles with different images but rather than class them as one game theyâ€™re listed as individual games to bump that figure up. The same goes for the Spot the Difference puzzles, of which there are more than one. Itâ€™s a little cheeky but thankfully there is a fair bit of variety on here including clones of Mine Sweeper, Pipemania and Boxxle. Weâ€™re sure the fact that Sudoku and Kakuro feature make this package instantly appealing to some too. 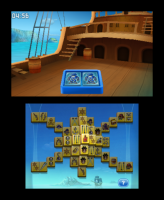 Amazingly, thereâ€™s a structure of sorts. Each game is score based with trophies handed out for finishing a game or puzzle within a certain time limit. The idea is that everybody in your household makes their own profile and then competes to see who can acquire the most trophies. Itâ€™s not much, but it could be enough to get a bit of friendly household rivalry going if your siblings are of the competitive sort.

Just like Ubisoftâ€™s Puzzler Mind Gym 3D what we have here isnâ€™t a very good use of the technology at hand. The 3D effect is far too distracting during the Spot the Difference puzzles and a trick has been missed for MahJongg â€“ the tiles would have benefited from the 3DSâ€™s illusion of depth but instead theyâ€™re displayed on the bottom screen. At least the music is quite soothing. You could even say that itâ€™s quite good. 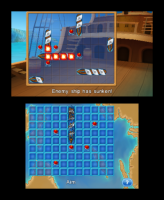 We thought the clone of Bejewelled â€“ known as Match 3 – might give this package a much needed addictive streak but itâ€™s as bland as can be. Although a couple of new coloured stones are introduced later in the game there are no combos or anything of the sort. As soon as there are no more pieces that can be matched itâ€™s game over. We did find the Connect 4 game to be oddly engaging though thanks to some quick witted AI, and although slow-paced and as ugly as a catfish Battleship isnâ€™t too bad either.

Itâ€™s hard to hate something that does little wrong, but at the same time itâ€™s very hard to get excited about something that doesn’t push the 3DS in the slightest. Still, for a few hours of entertainment 3D Game Collection suffices.