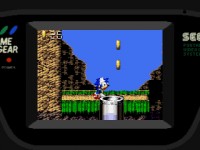 The Game Gear lived such a long life that the last few games for it were not based on Mega Drive titles but rather spin-offs of early Sega Saturn games such Panzer Dragoon Mini, Virtua Fighter Animation and Baku Baku. Sonic Blast was another late Game Gear game â€“ released in 1996, a whole year after the Saturn was launched â€“ and if youâ€™re thinking that a Sonic game with rendered visuals would have worked better on either Saturn or even Mega Drive then youâ€™d be right.

The Game Gear could handle some surprisingly nice looking chunky sprites â€“ see Mortal Kombat 3, Primal Rage and Beavis & Butthead for proof â€“ but memory restrictions prevented them from continuing to look nice in motion, with very distorted animation. Sonic Blast â€“ known in G-Sonic in Japan, and released as part of the Kidâ€™s Gear range â€“ is another that looks quite fetching in screenshots but awful in motion. 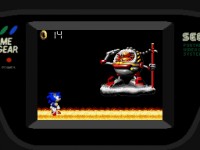 Memory restrictions are also presumably to blame for the shortness of the levels, and also the lack of them. There are just five different zones and most levels can be whizzed through in less than a minute. Level design is straight forward and Sonicâ€™s double jump ability does them no favours â€“ why wait for a platform to appear to cross lava safely when you can just double jump across? Sonic only loses ten rings when hit which likewise makes the game easier than it needs to be. I guess we should just be thankful that Sega found room to include Knuckles as a playable character, thus making it the first and last 8-bit Sonic to do so.

Battles against Robotnik feature screen-filling sprites but again at a cost â€“ after the first boss battle theyâ€™re all set against black backgrounds to preserve memory. Robotnik’s attack patterns are simple to learn – most are just a case of jumping over a projectile then performing a spin attack. The zone names are similarity devoid of creativity with names like ‘Yellow Desert’ and ‘Red Volcano’. 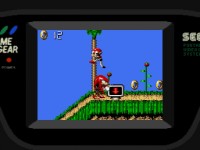 Sonic Blast isnâ€™t a terrible game but itâ€™s poor. It’s like playing one of the fan-made Sonic games that can be found online, with none of the heart and soul that youâ€™d expect to find in a genuine Sonic game. Whereas the likes of the original 8-bit Sonic had tuneful music that would get stuck in your head, Sonic Blast has music that simply annoys.

What should have been the Game Gear’s final hurrah, ironically ended up being the final nail in the coffin – a game that did nothing but show how old and out dated the format had become.