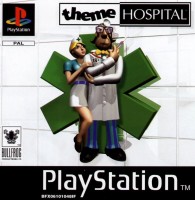 There was no doubting that Theme Park was going to be a success. It was colourful, fun and innovative and weâ€™re sure that running an amusement park ranks highly amongst the dreams of children. But running a hospital? Weâ€™d imagine that 99.99% of all people who actually do run a hospital would rather be behind the controls of a rollercoaster, yelling â€œscream if you want to go fasterâ€.

Naturally, then, there was doubt if Theme Hospital would do well. EA themselves estimated that it would sell only 50,000 copies. The reality was that it stayed at the top of the chart for months and was then knocking around in the budget chart for ten whole years after. Itâ€™s still available to purchase in this day and age â€“ its part of the Sold Out PC budget label and can be downloaded on PSN for play on either the PlayStation 3 or PSP. An original copy of the PlayStation version meanwhile can regularly fetch Â£10 on eBay.

The Theme Hospital that we all know and presumably love is a very different game than originally planned. It was initially going to be set over different time periods, such as Medieval and Victorian, but itâ€™s fortunate that Bullfrog started by drawing visuals for a modern day hospital first as thatâ€™s all they had time to include. The illnesses that you had to cure were going to be factual at first too, but later the decision to use made-up illnesses was chosen to avoid causing any potential upset.

Itâ€™s a good thing too, as the novelty illnesses gave the game a huge degree of appeal. Some patients would arrive with â€˜Bloaty Headâ€™ syndrome which could be cured with a sharp pin while â€˜3rd Degree Sideburnsâ€™ would require a trip to see a shrink, providing youâ€™ve employed one. A surgeon on the other hand would be needed to cure â€˜Spare Ribsâ€™. During an interview in the August 2011 issue of gamesTM, designers Gary Carr and Mark Webley revealed that they had plans for another two diseases â€“ â€˜Animal Magnetismâ€™ would have seen people arrive with animals stuck to them, while â€˜Saturday Night Feverâ€™ made patients wear white and black apparel and the floor tiles would have lit up underneath their feet.

Keeping your staff happy, making sure there were enough toilets for patients and employing enough engineers to keep your equipment running were just some of the things you had to contend with while dealing with emergences and VIP visits. If you didnâ€™t place enough sinks in the toilets then a virus could spread and harm your hospitalâ€™s reputation. Constructing rooms was simple enough, thanks to a intuitive blueprint system, but if there was a problem with the game itâ€™s that it did become very frustrating towards the end as you ended up being swifty swamped with the sick.

Interestingly, Bullfrog ran into a few problems with licensing during the development. The â€˜Elvis Syndromeâ€™ sickness had to be renamed to â€˜King Syndromeâ€™ as it was seen as a copyright breech, and the red crosses on the nursesâ€™ hats had to be removed otherwise theyâ€™d have to pay Red Cross. The box also had to be changed shortly after release as Bullfrog wasnâ€™t allowed to use a green cross in the background. One good thing did come out of licensing agreements though â€“ by including KitKat vending machines, Bullfrog received a box full of the chocolatey snack.

Apparently the game didnâ€™t go down too well in Japan where they take healing the sick very sternly but if this was the case then itâ€™s their loss. Itâ€™s still a hugely entertaining experience and although there has been a few copycats over the years, such as Codemasterâ€™s Hospital Tycoon on PC and Hysteria Hospital: Emergency Ward on DS and Wii, none have come close to Bullfrogâ€™s concoction of comedy and chaos.