Every month Matt pulls a magazine out for under his bed and gives it a fine going over. Stop giggling at the back there â€“ weâ€™re talking about video game magazines. This month: issue 64 of EMAP’s Nintendo Official Magazine from January 1998.

The history of the Official Nintendo magazine license has a curious history which can be traced back to the legendary Mean Machines magazine. Mean Machines was during its early days a multi-format affair but a few years down the line it was decided that the magazine was to split. And so, presumably with a clap of almighty thunder, Mega Machines Sega and Nintendo Magazine System were born. Nintendoâ€™s current machine at the time was the Super Nintendo Entertainment System, which is why the slightly odd moniker for the mag was chosen.

The first issue of EMAPâ€™s Nintendo Magazine System arrived in October 1992, but rather than feature the portly plumber on the cover as you may expect it came baring Lethal Weapon on the SNES. Yep, that old classic. It was also bundled with a Time Boy â€“ a miniature Game Boy containing a digital watch. Later free gifts included a Street Fighter II music CD and VHS tips video which also focused on Capcomâ€™s celebrated brawler.

Like all official magazines, the reviewing of import titles was forbidden. This didnâ€™t stop them from giving the likes of Earthbound and Super Mario RPG plenty of coverage, however. In fact Super Mario RPG made the cover in November 1995. 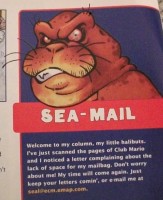 As the magazine grew older and the original staff, which included Julian Rignal, moved onto new pastures and the magazine started to take a tumble. Nintendo Official Magazine, as it was then known, was a pretty sordid affair which often referred to the PlayStation and Sega Saturn as the Phoney Greystation and Sega Sad Turn. NOM did though have a character that is rather fondly remembered – Seal, a parody of Nintendoâ€™s â€˜Seal of Approvalâ€™, the hallmark that appeared on every Nintendo game. This bad tempered mammal would dish out criticism and deliver in-jokes about the magazineâ€™s staff.

The dive in quality could be attributed to the fact that Nintendo repeatedly delayed the Nintendo 64, resulting in a lack of new content to cover. It could also be, on the other hand, that their review scores were somewhat dubious â€“ Donkey Kong Country 3 on SNES was dished out a rather staggering 99%.

Future took the Nintendo license off EMAPâ€™s hands in 2006; the first issue of Official Nintendo Magazine was launched in February 2006, featuring the Nintendo DS on the front cover and the tagline â€˜A New Way to Playâ€™. Itâ€™s far to say that for the first couple of months Future werenâ€™t quite aware how heavily free gifts swayed peopleâ€™s purchasing decision â€“ the first issue came with some next-to-useless cardboard drinks coasters. It wasnâ€™t until about six months down the line that free gifts that were actually of both use and value were included.

As always in our magazine look-back sections, weâ€™re going to look at an old issue. Behold issue 64 from January 1998, which featured a play-test of The Legend of Zelda: Ocarina of Time and confirmed that a little known game called Pocket Monsters was heading to the US. â€œNintendo of America is researching the Pockemon [sic] phenomenon and what features American kids might want from the game. Thereâ€™s no word on a UK release,â€ read the news.

The aforementioned review of San Francisco Rush sums EMAPâ€™s rendition of the magazine nicely â€“ why was a game thatâ€™s referred to as excrement given 74%? Weâ€™d like to say that these days are long gone, but were pretty sure that the present day Official Nintendo Magazine gave a similar score to the dire Asphalt 3D. Some things never change, but at least the days of magazines mocking other formats are behind us.