After the quiet month of January, which would have been a new release write-off if it wasnâ€™t for Resident Evil: Revelations, February has so many notable releases that itâ€™s like October all over again.

Say thank you to the nice Japanese men for Final Fantasy XIII-2, Metal Gear Solid HD Collection and Soul Calibur V which are out this week. Thereâ€™s also NeverDead from UK developer Rebellion and a budget-priced re-release of Dragon Ball Z: Tenkaichi Tag Team on PSP. Going by the release lists it’s one of final titles to be published for the handheld. Well, re-published in this case.

Final Fantasy XIII-2, Metal Gear Solid HD Collection and Soul Calibur V are three we have no qualms about recommending, as all of them have been getting solid reviews. Final Fantasy XIII-2 seems to be Squareâ€™s way of saying sorry for the mess that was the last Final Fantasy â€“ theyâ€™ve listened to their fans and given them what they want. What a name to call it though â€“ hopefully the bizarre numbering wonâ€™t scare off newcomers. That said, Eurogamer did say it was unfriendly to newcomers in their review. They gave it an 8 if you’re too lazy to click on the link.

Metal Gear Solid HD Collection is one the Americans got long before us. It’s certainly worth the wait – Metal Gear Solid 2, Metal Gear Solid 3 and the former PSP-exclusive Peace Walker with new online modes all in one package. Zavvi bagged the limited edition set which comes with an artbook and a T-shirt for Â£69.99. If you just want the game on its own then you should be able to find it for less than Â£30 online. 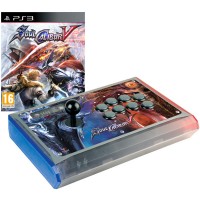 Namco has only given Soul Calibur V a few little nips and tucks but even so theyâ€™re apparently enough to make it feel new and fresh. If you worked an awful lot of overtime over Christmas and have some money burning a hole in your pocket, quite a few online retailers are bundling it with an arcade-style joystick for around Â£150. Or you could pick up the limited edition for Â£69.99, which comes with artwork signed by the design team. Thatâ€™s nice, that is.

Rebellionâ€™s NeverDead is one weâ€™ve always been wary about. Although Rebellion has made a few decent titles in the past, such as Rogue Trooper and Sniper Elite, theyâ€™ve also put out some rubbish. This would appear to be one of their better games with good mixture of western and eastern flavours. Eurogamer has dished out a 6 while the Official PlayStation Magazine liked it a little bit more and gave it a 7.