There was a time, back in 1998, when mobile phones didn’t have cameras. Standalone digital cameras were still far from being affordable; the common man was far more likely to covet a then swanky APS camera. Can you imagine that, children? Taking photos on film? The massive ’90s idiots, with their B*Witched and dial-up internet.

As such, back then I was hugely excited to get hold of Nintendo’s Game Boy Camera. Why? It can only have been for the novelty. But being a Nintendo product, it was designed to be a bit of fun, rather than a practical way of capturing images of the great wide world. 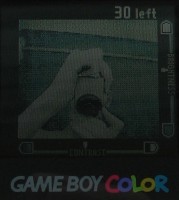 By modern standards, it’s hopelessly low-tech. In fact, I think it seemed that way even 14 years ago. There’s no technical specification in the instruction manual, unsurprisingly, but I’m reliably informed that it takes photos at 128×112 pixels – which by my reckoning comes in at about 0.01 megapixels.

It’s not awful though. I mean, in the photo of the screen to the right, you can make out the slightly more modern digital camera I used to take the photo, as well as my hands and ear. You’d probably need to be told that it’s a curtain pole behind me though.

Getting back to the fun side of it, there are mini games to put your four specially-shot game faces in: a shoot ’em up with face-based bosses, which is reasonably good; a basic juggling game; a music sequencer thing which was beyond me then, and remains beyond me to this day; and a little button-bashing race. They’re fine as these things go, but more fun is to be had expressing your creativity. 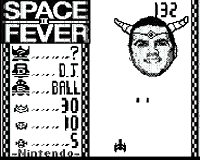 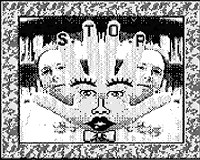 There’s a decent selection of trick lenses to play with, and you can stamp and draw all over the photos you’ve taken. Fun if you like that sort of thing, but the feature I remember being most impressed with is the animation suite. The temptation to make stupid little stop-motion animations is still strong, and it remains a surprisingly natty way to do so. 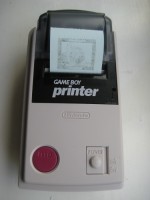 If the camera is a novelty, then the Game Boy Printer is… even more pointless. It prints onto tiny rolls of thermal paper which, as you can see from the photo, doesn’t really make for a very good image any more.

But get this: the back of the paper peels off to make stickers! Genius – if you want black and white low-resolution pictures stuck around the place. Which I didn’t 14 years ago, and don’t today.

It’s the sort of thing that probably sounded like a good idea – to Nintendo, and apparently to my formative self – but was actually a massive waste of everyone’s everything.

I didn’t realise until now that certain Game Boy games were also compatible with the printer. Not that that makes it any more worthwhile, really.