Weâ€™re ending our look at the world of achievements by rounding up the ones that are the hardest to unlock. Our source for these is the almighty True Achievements website. If you have an interest in Gamerscore boosting then registering for this site is recommended. Not only does it show you what your ‘true’ Gamerscore is by working out how rare the achievements youâ€™ve unlocked are, but also a vast amount of other stats, facts and guides showing how to unlock achievements with minimum fuss. 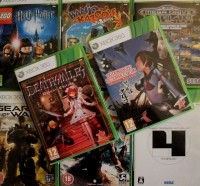 My â€˜best gameâ€™ in terms of achievement rarity is none other than Kinectimals â€“ it turns out that statistically not many people stuck with it after the first couple of hours. The true achievement score is even higher than Fallout 3 â€“ a game which I finished every piece of DLC for. Amazing, really.

Gears of War 3â€™s â€˜Seriously 3.0â€™ leads the way for achievement rarity – 72,685 tracked gamers have the game but only 38 have unlocked it. This achievement is for unlocking every Onyx medal and reaching level 100, with Onyx medals handed out for things like performing 6,000 execution moves, reviving 1,200 teammates and playing 3,000 matches of each online mode. The achievement is worth 100G, but True Achievements rates it at 4,371G based on the ratio of those who own the game and those who have acquired it.

Next up is Fight Night Championâ€™s â€˜Hamstring Blasterâ€™ (reach boxer level 45) that only 6 gamers have unlocked, which is closely followed by an achievement for running 621 miles in EA Sports Active 2. Only 2 gamers have felt physical enough to unlock this one. Rival fitness game UFC Personal Trainer must be too much hard work for most as well â€“ unlocking all videos is another rare achievement that only 2 gamers have gained. Burning 25,000 calories in The Biggest Loser is a tough one to chew too.

Kane & Lynch: Dead Men has two achievements that have caused a little bit of controversy in the world of achievements. Theyâ€™re for unlocking both Kane and Lynch for use in the Fragile Alliance mode, which you need reach rank 1 and rank 2 respectively on world leader boards to unlock. However it would appear that a small group of gamers have dominated the top 50 rank with bogus alternative accounts and are constantly playing against one another, preventing anybody from unlocking them. It has been suggested that theyâ€™ll only let people play against them for monetary gains.

Yoostar 2 for Kinect â€“ which puts your face in the starring role of a movie – is one of the hardest games to get all achievements on. The 50 achievements combined have a True Achievement score of 8,498G with five achievements in particular being bothersome to gain. The one of achieving 2,500,000 fame points is the one that most struggle with as the most mundane of tasks in the game, such as watching somebody elseâ€™s video online, only unlocks 10 fame points.

A lot of Japanese 2D shooters have hard achievements too, most of which entail finishing the game with just one credit. Deathsmiles, Raiden IV and Mushihime-sama Futari Ver 1.5, weâ€™re looking at you here. Even fewer people have managed to get 300,000,000 points on Deathsmiles than those who have finished it without using a credit.

Some of the worst games on Xbox 360 have the hardest of achievements. The poorness of the subject matter no doubt makes them even more of a challenge to get. Say hello to reaching level 10 in Power Up Heroes (worth 200G but has a True Achievement (TA) score of 1,198G), finishing the world tournament career mode in Brunswick Pro Bowling (200G; TA 1,134G), win diamond medals for every challenge in Motion Sports (50G; TA 1,103G) and destroying 1 million blocks in the dire Bomberman: Act Zero (50G; TA 1,002G).

Good luck with all of the above â€“ youâ€™ll need it. That and very strong willpower. And coffee.